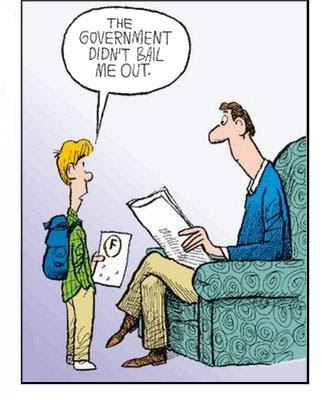 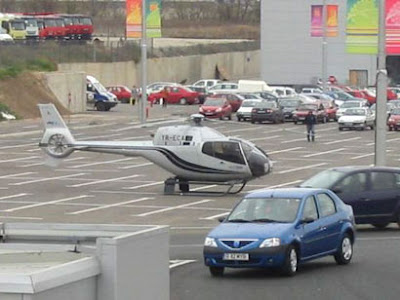 Romanian shoppers were shocked when a helicopter landed between cars in a supermarket car parking area.
The light helicopter dropped off two men who went into the Real supermarket in Bacau and came back an hour later to pick them up again.
Eyewitness Georgeta Stoica, said: "That thing just landed there, no security or protection, nothing.
"It was really windy outside and the helicopter could have easily hit the electric poles or wires. Who knows what could have happened?"
Radu Bondar, the head of the airport in Bacau said the landing was legal only if the pilot had the permission of the supermarket.
But Romanian civil aviation laws say light helicopters are not allowed to land in populated areas without precaution measures.
Adrian Enescu, who works near the supermarket, said: "It's the third time I've seen people coming shopping in their helicopters. I heard they are important persons but I think they're a little snobbish too."
The incident was filmed by an amateur cameraman who sent the film to a local television station.
Posted by The Man at 12:09 PM No comments:

Marines to the Rescue at California Motel Fire
Six off-duty Marines who raced through a burning motel warning sleeping guests that it was on fire were hailed as lifesaving heroes.
Everyone escaped the Americas Best Value Inn motel, in Lake Forest California, including one elderly man who required oxygen after he was carried to safety by one of the Marines. The cause of the fire, which ignited shortly before 8 a.m., was under investigation.
Marine Pvt. Colton Oliver said he and two colleagues were walking along a second-floor landing about 8 a.m. when they saw flames and smoke. They rousted their fellow Marines and all six began knocking on doors and windows of rooms, urging people to leave.
"Everybody was out by the time the firefighters got here," Oliver said. "It's what we're trained to do."
.
More cockroaches expected in Florida
Florida researchers say a hissing cockroach that grows as big as 5 inches inadvertently could be released in the state and, if so, would thrive.
The Madagascar hissing cockroach is one of four species of roach readily available on the Internet to lizard owners who purchase them illegally, said Phil Hoehler, an entomologist with the University of Florida.
Roaches are a good replacement for crickets as reptile food because they are less expensive and don't smell as bad as crickets.
The Turkestan cockroach, lobster roach and the orange spotted roach also are potential invaders, though they have yet to be spotted, Koehler warned pest-control operators in a recent magazine article.
"This is not good news for anybody," said Hoehler, noting where there are cockroaches, there will be escapes and Florida has the perfect climate for them.
Posted by The Man at 12:05 PM No comments: