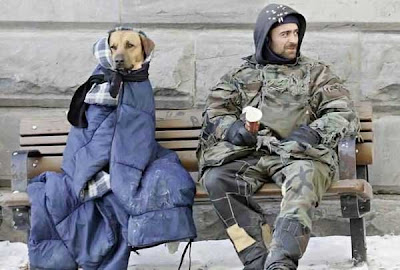 Why Toddlers Don't Do What They're Told
Are you listening to me? Didn't I just tell you to get your coat? Helloooo! It's cold out there...
So goes many a conversation between parent and toddler. It seems everything you tell them either falls on deaf ears or goes in one ear and out the other. But that's not how it works.
Toddlers listen, they just store the information for later use, a new study finds.
.
Dog Tail-Chasing Linked to High Cholesterol
A team of veterinarians has found a surprising link between compulsive tail-chasing in dogs and high cholesterol, according to a study published in the March issue of the Journal of Small Animal Practice.
The finding adds to a growing body of evidence -- mostly from studies on humans -- that high cholesterol may be a marker for behavioral problems such as panic attacks and obsessive compulsive disorder, which could be expressed by frequent tail-chasing falls in dogs.
Bouts of tail-chasing can also occur after a dog experiences physical trauma, surgery or illness, noted Hasan Batmaz, a member of the Faculty of Veterinary Medicine at Turkey's University of Uludag, who conducted the study along with a team of colleagues.
Certain breeds, such as bull terriers and German shepherds, seem to chase their tails more often than others.
For the study, the researchers took blood samples from 15 otherwise healthy dogs that were compulsive tail-chasers. To serve as controls, 15 dogs that rarely chase their tails were included in the study as well.
.
Posted by The Man at 7:00 PM No comments:

Spider-Man to the Rescue 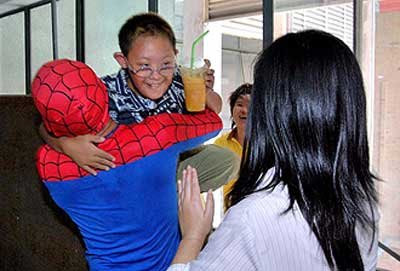 BANGKOK — A Thai fireman turned superhero when he dressed up as comic-book character Spider-Man to coax a frightened eight-year-old from a balcony, police said Tuesday.
Teachers at a special needs school in Bangkok alerted authorities on Monday when an autistic pupil, scared of attending his first day at school, sat out on the third-floor ledge and refused to come inside, a police sergeant told AFP.
Despite teachers' efforts to beckon the boy inside, he refused to budge until his mother mentioned her son's love of superheroes, prompting fireman Sonchai Yoosabai to take a novel approach to the problem.
The rescuer dashed back to his fire station and made a quick change into a Spider-Man costume before returning to the boy, he said.
"I told him Spider-Man is here to rescue you, no monsters are going to attack you and I told him to walk slowly towards me as running could be dangerous," Somchai told local television.
The young boy immediately stood up and walked into his rescuer's arms, police said.
Somchai said he keeps the Spider-Man costume and an outfit of Japanese television character Ultraman at the station in order to liven up school fire drills.
.
Posted by The Man at 6:49 PM No comments: 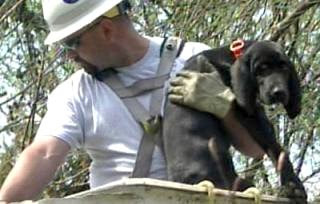 A Knoxville Tennessee family's young hound dog may turn out to be quite the bird dog.
"Buford", a 5-month-old hound mix, had to be rescued by utility crews after somehow climbing to the top of a 20-foot tree in his family's Knoxville yard.
No one saw Buford make his way up the tree, but by the time his rescuers returned him to the ground a small crowd had gathered.
Tyler Wilson, Buford's owner, says he's never seen anything like it.
VIDEO
.
Posted by The Man at 6:43 PM 1 comment:

It's feeding time at Chiba zoological park in Japan.
.
.
.
Posted by The Man at 6:21 PM No comments: