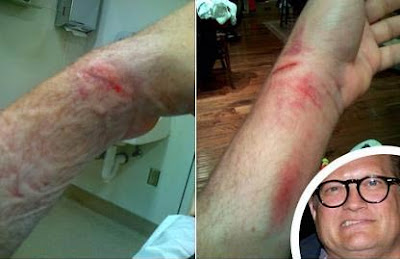 Drew Carey may be in over his head. Last Friday, Drew got his arm caught in the revolving turntable on stage while rehearsing for the Grocery Game.
He was back on set later that day in a soft cast, joking around with crew members and showing off his battle wounds. 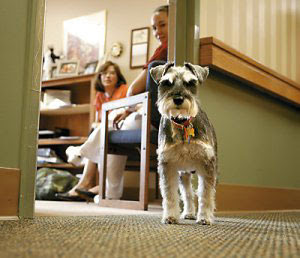 Scamp is the live-in pet at an Ohio nursing home, but the Schnauzer doesn't just bring companionship to the lonely. He has an eerie gift that also allows him to bring comfort to the dying.
Scamp can somehow sense when the end is near for one of the old folks. He then waits loyally by their bedside in the final hours.
Scamp's owner, Deirdre Huth, is a staff member at the nursing home, The Pines, in Canton. Ohio. She says Scamp even tries to raise the alarm when he gets the feeling that one of the seniors is at death's door."He has either barked or he'll pace around the room. The only time he barks is when he's trying to tell us something's wrong," Huth said.Yvette Notturno had a dear friend in the nursing home, and had heard stories about Scamp's gift. So when she got a call from a nurse that Scamp wouldn't leave her friends' bedside, she came right away knowing that her friend didn't have long,. Yvette's friend, Andrew Popa, died soon after.
Director of nursing Adeline Baker says Scamp has forecast practically every one of the 40 or so deaths that have occurred in the three years he's been at the home. She also insists Scamp's presence is welcomed by patients as the end draws near."It's not like he's a grim reaper," she said. "It's kind of comforting to know that maybe at the end of our lives, if we don't have family members, there will be somebody there to be with us."
There's a news video here.
Posted by The Man at 1:02 PM No comments: 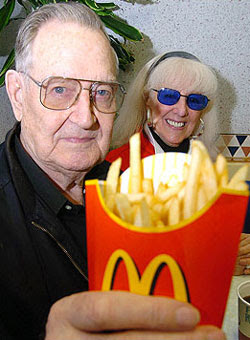 Fast food fanatics Lee and Mary Humphrey are really Lovin' It at McDonald's - eating at their local branch every day for the past 17 years. The pair has eaten the same meal - a double hamburger each with a shared large fries - more than 6,000 times and have vowed never to dine out anywhere else.
The couple, both 84, even has their own table at the high street eatery in Eastbourne, East Sussex, and moved house two years ago so they could be within walking distance of the restaurant - which they go to at 11am every day without fail.Mary said: "The staff all know us and have our food waiting when we come in. "We both order a double hamburger with one portion of fries between us, Lee has a cup of coffee and I give him one of my hamburgers, so I have one burger and he has three." "I did once try a Deli sandwich but that was way too much for me."
Posted by The Man at 12:49 PM No comments: 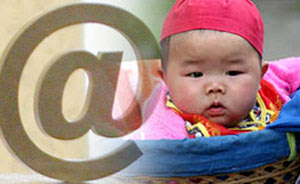 A Chinese couple tried to name their baby "@", claiming the character used in e-mail addresses echoed their love for the child, an official trying to whip the national language into line has said. The unusual name stands out especially in Chinese, which has no alphabet and instead uses tens of thousands of multi-stroke characters to represent words. "The whole world uses it to write e-mail, and translated into Chinese it means 'love him'," the father explained, according to the deputy chief of the State Language Commission Li Yuming. While the "@" simple is familiar to Chinese e-mail users, they often use the English word "at" to sound it out - which with a drawn out "T" sounds something like "ai ta", or "love him", to Mandarin speakers. Li did not say if officials accepted the "@" name. But earlier this year the government announced a ban on names using Arabic numerals, foreign languages and symbols that do not belong to Chinese minority languages.