Pull over sir, your 195mph Ferrari's going too slowly 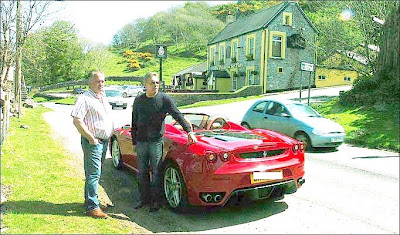 Denis Evans was stopped in his 195mph Ferrari by a top cop — and told off for going too slowly.
The businessman, 58, was driving his £164,000 car at 25mph in a 40mph village zone when off-duty Assistant Chief Constable Nick Croft saw him.
After a roadside check on the car’s ownership and the ticking off Denis, of Southerndown, South Wales, was allowed to go.
He said: "I was flabbergasted when he said I wasn’t going fast enough. The road is badly lit, with a nasty bend, and often has sheep on it. I felt 25 was safe."
Locals in Ogmore-by-Sea want the 40mph limit lowered.
A police spokeswoman defended Mr Croft, who lives nearby.
She said: "The Assistant Chief Constable was following the Ferrari, which was going very slowly, and he thought, ‘What if it was stolen?’"
.
Posted by The Man at 10:26 AM No comments: 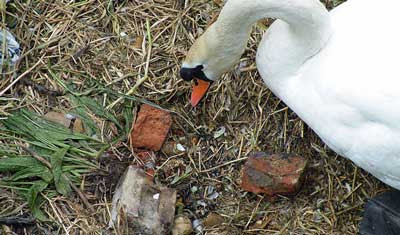 It is believed the eggs were smashed sometime on Tuesday
Nesting swans have had all their eggs smashed by vandals who threw bricks at their nest in east Dorset.
Andrew Stevens, who lives nearby, said he noticed on Tuesday that the nest and all six eggs had been smashed.
He told the BBC: "It's heartbreaking what's happened to them. She was clearly in distress and trying to incubate the bricks."
But swan rescue expert Ken Merriman said the birds were not injured and appeared healthy.
Mr Stevens said he cycles past the nest to and from work every day and the nest was targeted sometime during the day on Tuesday.
He said: "As I cycled away it brought tears when I noticed what had happened. It's awful, absolutely awful."
Richard Pogson, another local resident, said he had been following the pair building the nest over the past couple of months and last week noticed they had laid six eggs.
Healthy birds
"I went past again on Wednesday afternoon and saw quite a few pieces of brick on top of the nest and all the eggs appeared to have been smashed.
"I am at a loss to understand the mentality of so-called human beings who clearly take some sort of pleasure in doing this type of thing.
"While I appreciate there are an awful lot of bad things going on in the world, what I saw saddened me greatly."
Mr Merriman, owner of the Swan Rescue Sanctuary in Holt, Wimborne, said he had checked the pair on Thursday and they were not injured.
"The parent birds are perfectly healthy, normal looking birds.
"My concern is primarily the welfare of the birds and they are not stressed, they are not agitated.
"She was preening herself next to the nest while he was swimming up and down the river chasing other swans off, like he should be doing."
The RSPB condemned the act but said swan nests can become targets for vandals because of their large size.
VIDEO
.
Posted by The Man at 10:20 AM 1 comment: 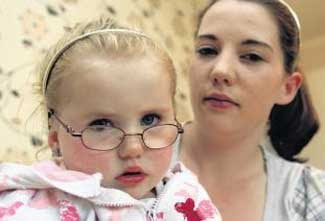 Glasses leave toddler disorientated after opticians fit lenses wrong way round
It was a routine visit to Specsavers for a pair of replacement glasses.
But when toddler Rubie Williams got home and put them on she kept bumping into things - because opticians had fitted the lenses the wrong way round.
It meant her good eye was looking through a lens for longsightedness and her affected eye through clear glass. The gaffe left the two-year-old dizzy and disorientated.
After a month stumbling around, mum Krystal stopped her wearing them. It was only during a routine hospital visit to check on Rubie's lazy eye that doctors spotted the mistake.
Krystal, 19, said: "I went to Specsavers because I had seen their Should Have Gone To Specsavers adverts.
"I now realize I shouldn't have gone to Specsavers. I'm worried this mistake could have damaged her eyes long-term." Doctors said Rubie had suffered no permanent damage but she will need further tests.
Krystal got the glasses from her local Specsavers store in Shirley, Hants. Bosses gave her a new pair for free. Retail chief Leighton Simmons said: "We regret the problems Rubie had."
.
Posted by The Man at 10:13 AM No comments: