.
Most Americans said....
I rather you not post my personal financial statements on the Internet,
even if they are a big joke.
.
Posted by The Man at 1:11 PM No comments:

How it's made - hard candy

Billy Bob’s pregnant sister was in a terrible car accident and went into a deep coma. After being in the coma for nearly six months, she wakes up and sees that she is no longer pregnant. Frantically, she asks the doctor about her baby.
The doctor replies, "Ma’am, you had twins! A boy and a girl. The babies are fine and your brother came in and named them."
The woman thinks to herself, "Oh no, not my brother… he’s an idiot!" Expecting the worst, she asks the doctor, "Well, what’s the girl’s name?"
"Denise," says the doctor.
The new mother says, "Wow, that’s a beautiful name! I guess I was wrong about my brother. I like Denise." Then she asks, "What’s the boy’s name?"
"Denephew."
Posted by The Man at 10:15 AM No comments: 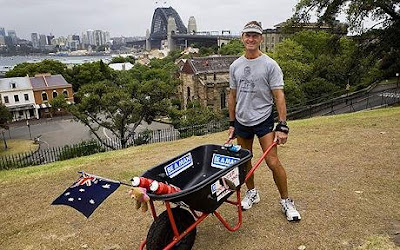 A 65-year-old British man has almost completed an epic 2557 mile run across Australia, while pushing a wheelbarrow.
David Baird, from Western Super Mare in Somerset, set out from Perth on September 21 and will finally reach the Pacific Ocean at Manly Beach on Saturday January 17.
When he crosses the finish line he will have run the equivalent of one hundred full marathons in just 112 days.
During the charity run well-wishers threw more than £9,145 ($20,000) into the barrow.
And Mr Baird said that while he has not suffered a single puncture, his feet have not fared so well.
He said: "All my adult life my feet have been a size ten but within three weeks my feet had spread out and I had to change to an eleven.
"Two weeks later I needed a twelve. My feet feel huge. I'm convinced my arms have got longer too".
Mr Baird has been running most of the way into a head wind and in temperatures of up to 46 degrees.
Eating mostly fruit and vegetables he has lost more than a stone (7kg) in weight.
Now he is looking forward to finishing the run and dipping his feet into The Pacific Ocean. But he will not be taking much time off.
He said: "I'll probably get up on Sunday and go for a run without the barrow which will feel fantastic I'm sure"
Mr Baird, who emigrated to Australia and spent 21 years working in a coal-mine, got his idea for the wheelbarrow run from a race held near his home in Queensland.
Organised by locals, the 18km challenge is held as a reminder of the gem prospectors who flocked to the area in Australia's early years.
"Legend has it that one prospector arrived in town with nothing other than the pick and the wheelbarrow he was pushing," Mr Baird said.
"Over the course of several years he made his fortune and then drank and gambled it all away until eventually he was seen leaving town carrying exactly all he's arrived with."
Mr Baird has been raising money for Breast Cancer and Prostate Cancer charities.
.
David Baird Website
.
Posted by The Man at 10:06 AM No comments: