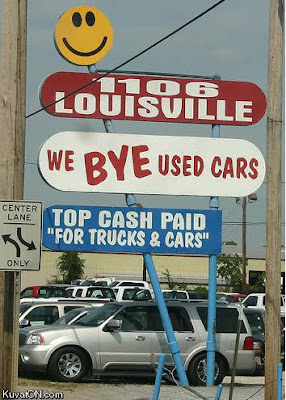 Bus shelter built on a road with no buses 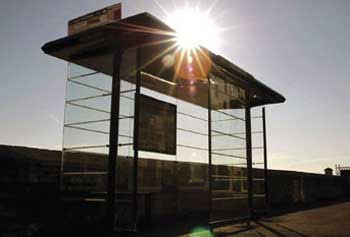 Council officials are baffled after discovering that their contractors have built a bus shelter on a road that has never been a bus route.
The spotlessly clean shelter, complete with advertising boards and seating, was erected 10 years ago but residents cannot explain why it was put on a stretch of road in Eastboro Way, Nuneaton, Warwicks, where there are no buses.
Ron Bryant, 72, a pensioner, said: "It suddenly appeared overnight like something out the X-Files. I have lived near the road for 20 years and never seen a bus go down there in my life.
"People living around here have always joked about it being a bus stop to a parallel universe."
The shelter was erected by a French firm JC Decaux, which was granted planning permission for a number of shelters in the town.
The company designs and installs bus shelters free of charge in exchange for the right to display commercial advertising on them. One theory is that there may have been a proposed bus route at the time the shelter was put up.
"The shelter was put up at the expense of JC Decaux who continue to clean and maintain it at no cost to the local authority," said a spokesman for Nuneaton and Bedworth borough council
"The shelter is not causing a hazard but if it was to do so, or if JC Decaux stopped maintaining it, then we would request that they take it down.
"As it stands, the bus shelter provides information, seats, comfort and shelter to pedestrians, at no cost to the council."
A spokesman for Stagecoach, which runs buses for the council in Nuneaton, said: "I don't know why this stretch of road should have a bus shelter. We have certainly never requested one. Perhaps it just serves as a nice resting point for pedestrians."
JC Decaux said: "All I can say is that we are in contact with the council to see what plans they have for this shelter and await their instructions."
.
Posted by The Man at 1:24 PM 1 comment:

The 19 worst drive-thru foods in America