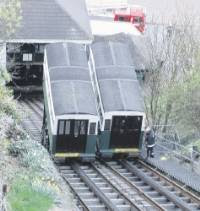 Workers leave passengers stranded
Eight people were left stranded mid-air in a cliff lift for an hour and a half after its operators turned it off and went home.
The holidaymakers, including two little girls and three pensioners, were abandoned in a "very hot" carriage halfway up the South Cliff following a mix-up between staff at the top and the bottom of the Spa lift.
Each night the lift is shut down with both carriages left in the middle of the track, halfway up the cliff.
But after the eight passengers had boarded at the bottom, the operator at the top of the cliff shut down the lift for the day and both operators went home.
One of the victims had to call the fire brigade on a mobile phone, and crews dashed to the scene. It was said that there was a misunderstanding with the operator below. After eventually contacting a lift engineer, the shaken tourists were set free after enjoying the view for 90 minutes.
The incident left some passengers who were from Scotland, Norfolk and Kent, shaken. But a council chief last night said it had tried to make amends by offering various good-will gestures including free Spa theater tickets.
.
Posted by The Man at 5:21 PM No comments:

Man and his cat

26th October 1956: Henry Behrens, the smallest man in the world dances with his pet cat in the doorway of his Worthing home. Measuring only 30 inches high, Mr Behrens has made a living by traveling the world with Burton Lester's midget troupe. 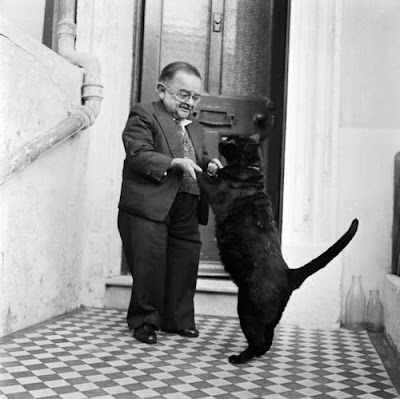 Young Prince William, the future kind of England, is beginning to molt at age 26, sending everyone into a tizzy. Prince William may be struggling to cover up his bald spot but until now he has managed to conceal the fact that at 26 he still wears a brace on his teeth. 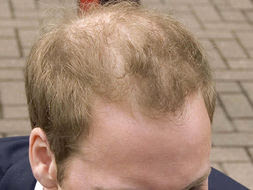 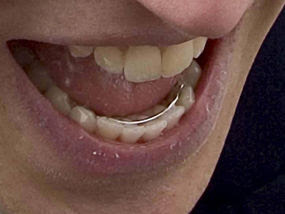 Even his own staff had not noticed that he was wearing it until it was spotted while he was meeting excited children during a visit to Staffordshire yesterday. William has had the wire in place behind his bottom teeth ever since his braces were removed when he was 16.
A St James’s Palace spokesman said: "Prince William has used a permanent support for his bottom teeth for 10 years as part of routine treatment.
.
Posted by The Man at 5:03 PM 2 comments:

But it was funny 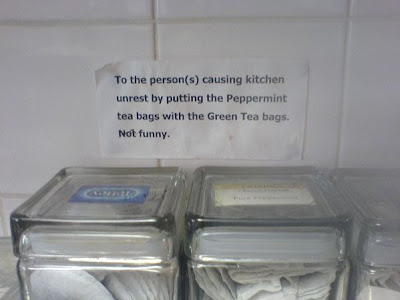 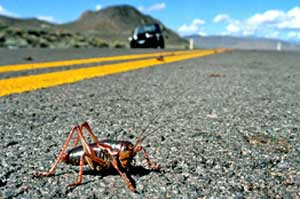 The residents of Tuscarora Nevada, anticipating an imminent attack, will be ready with a perimeter defense. They'll position their best weapons at regular intervals, faced out toward the desert to repel the assault.
Rock music blaring from boom boxes has proved one of the best defenses against an annual invasion of Mormon crickets. The huge flightless insects are a fearsome sight as they advance across the desert in armies of millions that march over, under or into anything in their way.
But the crickets don't much fancy Led Zeppelin or the Rolling Stones, the townspeople figured out three years ago. So next month, Tuscarorans are preparing once again to get out their extension cords, array their stereos in a quarter-circle and tune them to rock station KHIX, full blast, from dawn to dusk. "It is part of our arsenal," says Laura Moore, an unemployed college professor and one of the town's 13 residents.
In flyspeck villages like Tuscarora, crickets are a serious matter. The critters hatch in April in the barren soil of northern Nevada, western Utah and other parts of the Great Basin, quickly growing into blood-red, ravenous insects more than 2 inches long.
Then they march. In columns that in peak years can be two miles long and a mile across, swarms move across the badlands in search of food. Starting in about May, they march through August or so, before stopping to lay eggs for next year.
.
Posted by The Man at 11:09 AM 1 comment:

Laetitia and Guillaume, a young French couple aged 23 and 26 set out from Miami on 27 September 2008, with the objective of getting to Ushuaia in Tierra del Fuego entirely on foot and with just 1 euro a day.
Click on to Enlarge 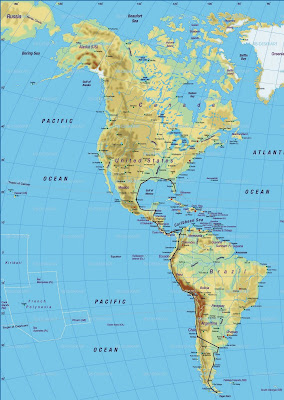 Labels: Exercise, In the News

Lake Wendouree is an artificially-created and maintained shallow urban lake for the city of Ballarat, Victoria, Australia.
Click on to Enlarge
The name Wendouree comes from a local aboriginal word wendaaree which means 'go away'
.
Posted by The Man at 10:08 AM 1 comment: