Britain may introduce a two-child limit.

Families should restrict themselves to having a maximum of two children to stabilise the effect on the environment of Britain's rapidly growing population, a think tank warns today.
According to the Optimum Population Trust, Britain's rising birth rate, currently growing at the highest rate for nearly 30 years, should be considered an environmental liability.
"Each new UK birth, through the inevitable resource consumption and pollution that UK affluence generates, is responsible for about 160 times as much climate-related environmental damage as a new birth in Ethiopia, or 35 times as much as a new birth in Bangladesh," the report says.
It calls on the government to introduce a "stop at two children" or "have one child less" guideline and to review incentives that may lead some teenage girls to become pregnant.
The author of the report, John Guillebaud, professor of family planning and reproductive health at University College, London, made the call after figures from the office of national statistics showed 669,531 babies were born in Britain last year, with the UK having the highest teenage pregnancy rate in western Europe.
Posted by The Man at 8:41 AM No comments:

All New Meaning of “BEWARE of DOG” 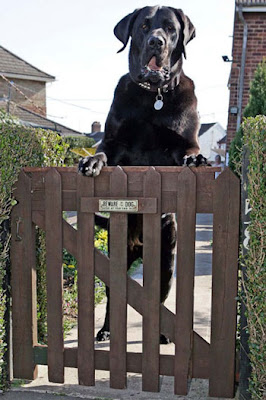 At 6ft 5ins (1.96m) on his hind legs, Samson must be the perfect guard dog. But to his owners, Julie and Ray Woods, of Boston, Lincolnshire, the three-year-old Great Dane-Newfoundland cross is simply a much-loved pet.
Samson - who weighs in at 125 kilograms = 275.6 pounds is being billed as "Britain's biggest dog" after scrap merchant staff who weighed him contacted the media.
Mrs. Woods says Samson has been "very unsettled" by the media interest and so she and her husband have ruled out any more photographs or filming.
She added: "He's a very placid, laid-back dog and I don't think he liked being ordered about - he just likes the quiet life." With video.
Posted by The Man at 7:19 AM No comments: