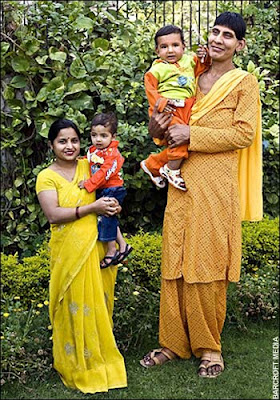 Like mother like son. India's tallest woman, who stands 7ft 2in, claims her baby has grown to 3ft 2in in only 10 months.

Svetlana Singh says she hopes her child Karan, who already weighs three-and-a-half stone, will be the tallest man in the world.

Speaking in the family's home in Meerut, outside Delhi, Mrs Singh told how the hungry boy needs feeding an astonishing 20 times a day. "He just doesn't stop eating and never stops growing," she said. "He is only ten-months-old and wears clothes designed for five-year-olds. "Karan has never fitted into baby clothes, even when he was first born he was 2ft 2in tall and was the same size as a normal two-year-old." Husband Sanjay, who at 6ft 6in has to look up to his wife, hopes his son's height will help him become a basketball player so he can study in America. "Both sides of our family are very tall - my father is 6ft 5in and Svetlana's father is 6ft 7in - so Karan could not really have been born any other way," he said.
Despite being proud of their size the family admit it can cause problems. Traveling in buses and cars is almost impossible because both husband and wife have to stoop to fit in. And shopping becomes an ordeal in itself as hordes of curious onlookers gather to stare at the couple and their giant baby.
Posted by The Man at 2:16 PM No comments:

Breakfast for a 3-week-old kitten

Baby thrown out of shop for 'Farting' 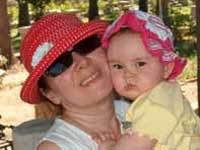 A WOMAN was asked to leave an Enfield charity shop after the assistants accused her baby of passing wind.
Dr Mine Dogantan Dack, a research fellow in piano music at Middlesex University, claims one of the assistants asked her to leave the British Heart Foundation (BHF) shop, in Palmers Green, on April 12, after implying her 17-month-old daughter had caused a stink.
Dr Dack said: "I told them that my baby didn't do a poo or (pass wind) while we were in the shop; and that even if she did they have no right to ask me to leave.
"Who gives the BHF staff the authority to act as the 'fart police'?