For the "BIG" bills 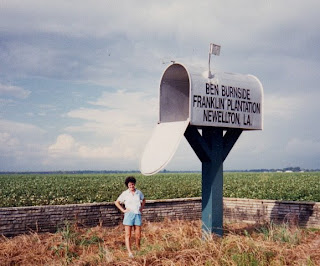 Parrot answers knock at the door. 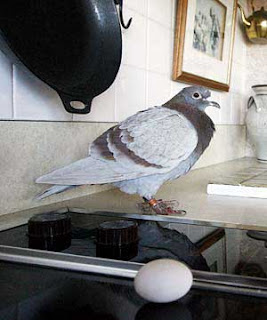 It was a normal Sunday afternoon at Pat Cowie's place.
Until a pigeon laid an egg on the stove top.

The pigeon popped in an open door at Pat's Evans Street home, climbed 14 stairs turned hard left at the top, wandered into the kitchen, and chose a smooth ceramic stove top as the ideal location for a spot of ovular action.
Pat was outside when the pigeon arrived and didn't know she had a bird burglar until she wandered into the kitchen. It took a moment to register the pigeon was there, let alone the fact it had laid an egg.
The pigeon then made herself at home on the bench top, investigated the pot plants on the windowsill, and partook of a little post-egg preening.
But, after submitting to an intensive photo session, she became unsettled and began flying. Concerned she might hurt herself, the family opened doors and off she went, leaving the egg behind.
According to Brian Christian from the South Canterbury Pigeon Flying Club, it's not a tale he's heard before.
However, it doesn't surprise him that the pigeon seemed quite comfortable inside - the birds are used to being indoors and being handled. Brian remembers a woman in Selwyn Street managing to corral three from her roof into her laundry.
He says it's likely she's a race bird, and her owner wasn't aware that she was on the point of lay when she was sent away for a race. About 700 pigeons were released in Timaru on Saturday to fly back to the North Island, so she may have been among that lot.
While pigeons can lay two eggs, often a day-and-a-half apart, this may have been her first and only. As for abandoning the egg, it's the male bird's job to sit during the day. The hens take the night shift.
Posted by The Man at 10:24 AM No comments: