Riddle of the day

Arnold Schwarzenegger has a big one.

Michael J. Fox has a small one.

Madonna doesn’t have one.

The Pope has one but doesn’t use it.

Clinton uses his all the time.

Mickey Mouse has an unusual one.

Liberace never used his on women.

Jerry Seinfeld is very, very proud of his.

Cher claims that she took on 3.

We never saw Lucy use Desi’s.

Put your answer in the comments.

I wonder if they have "Socks" 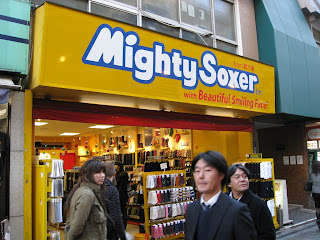 "Traffic: Why We Drive the Way We Do,"

In his book, Tom Vanderbilt takes the traffic trivia bit to a new level.
Here are some things about traffic that may surprise you.
.
* People who live on streets with more traffic spend less time outside and have fewer friends.
* Saturday at 1 p.m. has heavier traffic than weekday rush hours.
* Highways can handle more cars at 55 mph than 80 mph.
* A driver driving at 30 mph sees an average of 1320 pieces of information every minute.
* The top 10 most dangerous cities for pedestrians in the U.S. are all below the Mason-Dixon line. Five are in Florida (Number One? Las Vegas)
* The average driver looks away from the road for .06 seconds every 3.4 seconds; drivers search for something in the car 10.8 times per hour.
* The most commonly dropped objects on Los Angeles freeways are ladders.
.
Posted by The Man at 1:50 PM No comments: 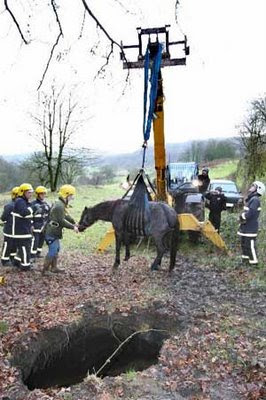 .
.
Missing horse rescued from well
A horse which disappeared from a West Yorkshire riding stables was rescued three days later after being found at the bottom of a 10ft well.
Eight-year-old Steffi was pulled out of the hole in the Shibden Valley near Halifax in a three-hour operation involving firemen, the RSPCA and a vet.
Stable girl Katie Clegg, 16, raised the alarm last Saturday when she could not find the horse in its field.
The mare was found on Tuesday by a dog walker, having suffered no injuries.
It is believed that a covering of plants which had hidden the well opening in the field was washed away in recent heavy rains and Steffi fell 10ft into the hole.

.
Firefighters help scared pot belly pig down stairs
PINELLAS COUNTY -- Firefighters know a thing or two about getting a cat out of a tree, but this morning St. Petersburg firefighters added a new talent under their belts: rescuing a pot belly pig.
The Vietnamese pot belly pig named Dudley followed his nose into some trouble. His owner, Cynthia Taylor, says normally Dudley eats four ounces of food a day.
But one day workmen who were at Taylor's house moved some pig food and then left it where Dudley could get into it.
"The night they left the bag on the floor, he had 16 pounds of food overnight," Taylor said.
Because of all the food Dudley had, Taylor didn't give him any food Sunday. So when Taylor was walking around with Dudley's food dish Monday, the pig was keeping close to her -- a little too close.
As Taylor was walking upstairs she didn't realize Dudley was following behind her -- something the pig had never done before. Then Dudley took one look down the steep stairs and refused to go back down.
"He's never been upstairs. He's afraid of the stairs," Taylor said. "So he wouldn't come down, and I had to call the fire department."
St. Petersburg firefighter Brad Weshphal said he doesn't blame the pig for not wanting to go down the steep stairs.
Westphal, along with two other firefighters, answered the call for help.
"We've gotten cats out of trees, dogs, ferrets out of walls, snakes; but this is the first pig," Westphal said.
Fortunately, the firefighters didn't have to do much to convince Dudley down the stairs.
"We just herded him to the stairwell, and then I grabbed him around his waist and helped him down the stairs," Westphal said. "And he was squealing the whole time."
Taylor said she is thankful for the firefighters and will be getting a small gate to block the stairs.
"I think they were absolutely terrific. They had a great sense of humor," Taylor said. "They were very sweet to come help me."
Slideshow
.
Posted by The Man at 1:32 PM No comments: