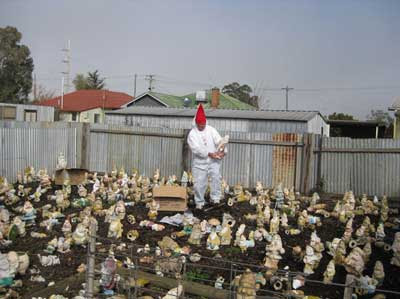 Approximately 1500 garden gnomes have been saved from the scrapheap after an 800km rescue mission.
The impressive collection of small cement people was left orphaned after the death of an elderly Cootamundra woman, with the new owners of the property not enamored of the gnomes.
But a solicitor acting for the deceased estate in southern New South Wales contacted the Australian Gnome Convention seeking advice on how to dispose of the garden ornaments.
The convention, established by the Lower Blue Mountains Rotary Club, is held annually in Glenbrook, west of Sydney, and has become the spiritual home for Australia's gnomes.
Convention organizer and "Gnome Master'' David Cook said he did not hesitate in organizing the rescue party when contacted about the homeless little folk.
"We didn't want to see them put in a skip and taken to the tip and all smashed up,'' Mr Cook said.
Ranging from two-centimeter fridge magnets to 1.5m-high mega-gnomes, the garden fixtures have suffered a degree of wear and tear.
"They had been there for a number of years,'' Mr Cook said.
"They were all faded. Their red hats were no longer red and all that sort of stuff.''
The gnomes' previous owner lived alone and was known for having a small number of the statues in her front yard, but few locals knew the full extent of her backyard collection.
"She had no more than half a dozen gnomes out the front, but no one suspected she had a whole bevy out the back,'' said Bill Price, a Cootamundra Rotarian.
The four-member rescue team joined with Cootamundra locals on Saturday, working for almost four hours to load "every square inch'' of two vehicles and a trailer.
The gnomes will be fostered out to various locations across the Blue Mountains but will be reunited next Australia Day for the sixth annual Australian Gnome Convention.
Mr Cook came up with the idea for the convention as one of the Australia Day activities organized by the Rotary club each year.
It started off with about 100 gnomes in its first year and has grown to attract more than 1000, with some traveling from overseas to attend.
PHOTO GALLERY
.
Posted by The Man at 12:51 PM No comments: