However they have since found an unlikely surrogate mother in chimpanzee Anjana, who has taken on the role of caring for the cubs.
The two-year-old chimp has been helping keeper China York care for the 21-day-old cubs at The Institute of Greatly Endangered and Rare Species (TIGERS) in South Carolina. 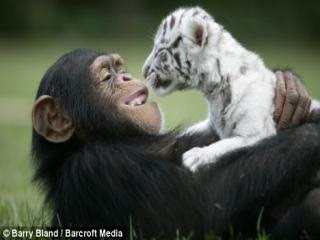 'Mitra and Shiva, were born during Hurricane Hannah,' said Dr Bhagavan, founder of TIGERS. "During that time everything flooded in the sanctuary and they had to be moved into the house as their mother became stressed."
'It was important for their safety that they were separated.'
Placed into the care of infant animal care giver China and her chimpanzee companion, Anjna, the cubs have become almost inseparable from their new motherly figures.
Both Cubs And Anjana Go Home With Their Trainers Everyday - That Is Right - Anjana Even Sleeps In The Same Bed. 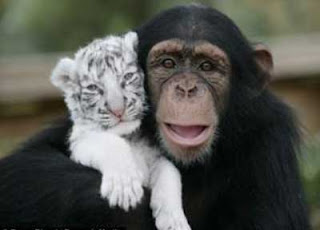 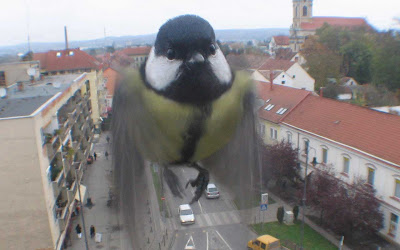 BERLIN — A man who suffered from AIDS appears to have been cured of the disease 20 months after receiving a targeted bone marrow transplant normally used to fight leukemia, his doctors said Wednesday.
While researchers — and the doctors themselves — caution that the case might be no more than a fluke, others say it may inspire a greater interest in gene therapy to fight the disease that claims 2 million lives each year. The virus has infected 33 million people worldwide.
Dr. Gero Huetter said his 42-year-old patient, an American living in Berlin who was not identified, had been infected with the AIDS virus for more than a decade. But 20 months after undergoing a transplant of genetically selected bone marrow, he no longer shows signs of carrying the virus.
However, Dr. Andrew Badley, director of the HIV and immunology research lab at the Mayo Clinic in Rochester, Minn., said those tests have probably not been extensive enough.
Posted by The Man at 4:53 PM No comments:

Police Say Children's Candy Was Replaced with Pet Food
The contents of at least two bags of M&M's were apparently removed and replaced with what is believed to be pet food.
The snack pack-sized bags — and their contents — were turned over to New Jersey police and were sent to a state testing lab.
Police said the kids were given the candy, which is manufactured by Mars Inc., while trick-or-treating in Medford, N.J.
.
Woman "who runs everywhere."
There can't be many people with a smaller carbon footprint than Joan Pick - as she hasn't used any form of motorized transport since 1992. In fact since 1973 the "energy economist" has got almost everywhere by running or walking. The last time she went anywhere by a method other than on foot was when she had to get in a hearse to her mother's funeral. And the only other times in 35 years she has used motorized transport were when she was taken to hospital by ambulance and a handful of train trips to visit her sick mother before she died.
The 67-year-old, from Turnpike Link, East Croydon, admits she is known locally as "the lady who runs everywhere".
Since 1973 she has run or walked approximately 135,415 miles - the equivalent of nearly five-and-a-half times round the world.
.
Posted by The Man at 9:49 AM No comments:

There are still good people in this world

Three orphaned teenagers who are desperate to give their mother a dignified funeral has plucked at the heartstrings of kind-hearted folk across Peterborough.
A flood of support has swept around the city since The Evening Telegraph revealed how the youngsters are auctioning their possessions, including their three pet dogs, to raise the money they need to bury their mother. Teenagers Troy (17), Rory (15) and Alice (14) have been told they need £2,500 to meet the costs of a funeral for their mother, Jayne McCourt, of Whittlesey, who died at the age of 51 in her sleep almost two weeks ago.
And the youngsters have been told they have just 14 days to find the money to pay for the funeral or their mother, whose body is in Peterborough District Hospital, may have to be buried in a "pauper's grave". The first offer of help was from Peterborough United Football Club manager Darren Ferguson who has offered £2,500 on behalf of the club.
Posted by The Man at 9:42 AM No comments:

A dog lost both his bark and his bite when a bizarre accident left his jaws glued together. Cymbeline, a Scottish terrier, is trained to pick up the post from the doormat and hand it over to his owner Kimberly Fisher, 41.
But the faithful pet came unstuck when a high gloss finish on a fast food menu stuck his jaws closed for more than half an hour.
Ms Fisher from Colchester, an academic researcher, said Cymbeline had been trained to collect the post without chewing it. "He hates post so I've taught him to bring it to me without damaging it and then I give him a treat."
He brought me this menu but it had stuck his jaws together."It was a big, high gloss paper menu which had turned into a paste - the gum stuck it between his teeth. "He was trying very hard to open his mouth. It was funny as well as sad."
The Roosters fast-food menu, which ironically promises "mouth-watering results" for anyone who tries their chicken, was stuck fast and eventually Ms Fisher was forced to take Cymbeline to the vet.
Posted by The Man at 9:37 AM No comments: