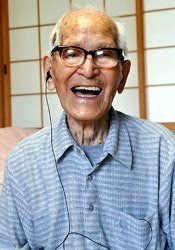 The number of centenarians has topped 40,000 for the first time in Japan, the Ministry of Health, Labor and Welfare announced on Friday.
As of Sept. 15, there will be 40,399 centenarians across Japan, up 4,123 from the previous high of 36,276 in 2008, in the largest yearly growth on record.
The vast majority of centenarians are women: 86.5 percent at 34,952, while men numbered 5,447. The percentage of female centenarians has been on a yearly rise, according to the ministry.
The oldest man in Japan is Jirouemon Kimura, a 112-year-old resident of Kyotango, Kyoto Prefecture, while the oldest woman is a 114-year-old resident of Okinawa Prefecture, whose name is being withheld.
.
Posted by The Man at 3:21 PM No comments: 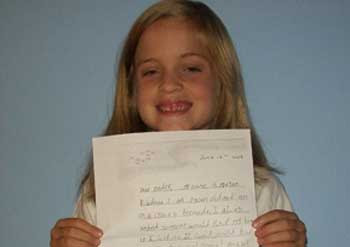 A few days after Meagan Bilodeau dropped a bottled message into the Atlantic Ocean during a cruise near Bermuda, the girl was home in Massachusetts.
A month after that, the bottle nearly came home, too.
The 8-year-old recently learned the message she dropped from a cruise ship roughly 600 miles off North Carolina's coast on June 18 was found in late July by a girl whose family was boating in Massachusetts' Vineyard Sound, Meagan's family says.
The spot was perhaps 15 to 20 miles from Meagan's home near Falmouth.
"It was almost as if the bottle had been equipped with a homing device," Meagan's mother, Denise Acquaviva, said in a telephone interview this week.
The family was on a cruise to Bermuda when Meagan's father persuaded her to write the message, which included Meagan's name and address, Acquaviva said.
"I always wished someone would find my bottle if I sent one. If found, would you kindly write back to me? Please? Please? Please?" the letter read.
The message was put in a water bottle, and Meagan tossed it into the Atlantic Ocean not long after their two-and-a-half-day return cruise to Massachusetts began, Acquaviva said.
Meagan's father told her the currents could take the bottle to Europe. Meagan said she wondered who would find it and couldn't wait to correspond with whoever did.
"I hoped that it would end up somewhere far away," she said by phone this week.
On July 28, hundreds of miles from Bermuda, 11-year-old Teddy Herrick was boating with her family between Massachusetts' Martha's Vineyard and Cuttyhunk Island when the vacationing group spotted the bottle in the water. Teddy fished it out with a net, and she read the message.
Teddy, who lives in Telluride, Colorado, was excited to find it. She had just read a book whose characters became pen pals after one found the other's bottled message.
"I was very surprised. I thought it was a cool thing to do, and it was cool that the current would take it close to her home," Teddy said by telephone this week.
Teddy wrote to Meagan late last month, letting her know where the bottle was found.
The most likely path for the bottle would have been to or near the United Kingdom, but an eddy could have broken it away from the Gulf Stream, allowing it to float to Massachusetts, said Jenifer Clark, a satellite oceanographer who works for her own company in Maryland after years of employment with the National Oceanic and Atmospheric Administration.
.
Posted by The Man at 3:15 PM No comments: 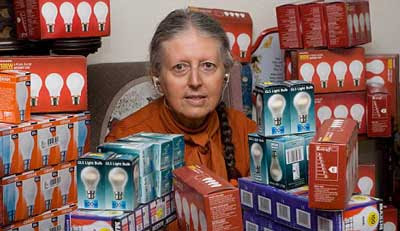 Woman stockpiles 1,100 banned light bulbs so she can read for rest of her life
A pensioner has defied an EU ban by hoarding more than 1,000 traditional light bulbs - enough to see her 'into the grave'.
Valerie Hemsley-Flint, 62, has spent more than £500 of her pension money stockpiling the old-style 100-watt bulbs.
September 1, EU countries were banned from producing or importing incandescent bulbs and shops can sell only energy-efficient ones.
But Miss Hemsley-Flint said the light from them is not good enough for her to read by and the flickering sets off her epilepsy.
So she has bought 1,100 old-style bulbs and is calling on the Government to scrap the ban.
From her home in Sittingbourne, Kent, Miss Hemsley-Flint said: 'I suffer from photosensitive epilepsy, which means I can't get near any screen or anything that flickers.
'I worked out that if I live as long as my aunts did - into their 90s - I would need about 30 years' worth of the old-style bulbs for each room.
'I have more than 1,000 now - in fact 1,100. It has cost me a small fortune but for me it's worth it and will see me through to the grave.'
The former teacher, who also suffers from migraines, estimates she needs about 20 bulbs at a time to light her £300,000 three-bedroom country cottage.
.
Posted by The Man at 3:11 PM No comments: