At this cafe, you get what the person before you ordered. The next person gets what you ordered.
What a wonderful, bizarre idea (especially if you ignore the unresolved question of what the first customer of the day receives.) When you order, say, an ice cream and coffee, you pay for them and find a seat. In a few minutes, you're called to the counter where you pick up, you guessed it, not an ice cream and coffee. You receive whatever the person before you in line ordered.
So what's to keep people from ordering an inexpensive item and hoping the person before them was a high-roller? Well, I guess shame.
Also, the cafe has a few rules. Among them:
Treat the next person. What to treat them with? It's your choice.
No buying twice in a row.
Please enjoy what you get, even if you hate it. (If you really, really hate it, quietly give it to another while saying, "It's my treat...")
.
Posted by The Man at 4:52 PM No comments:

Boy brings bull to school for show your pet day 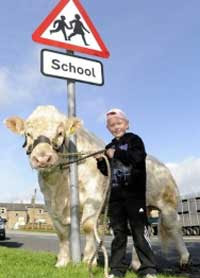 The seven-year-old farmer’s son brought his 16-month-old champion Charolais, called Hallbankgate Dragon, to show off to classmates at Hallbankgate School, near Brampton.
The school’s acting head teacher Chris Thompson said: “Two pupils from class one and two are pulled out of the hat each week to be a VIP, who can wear their own clothes, are introduced to visitors to the school, and they are entitled to bring in their most precious possession, and this is Thomas’s.
“We had the vicar’s dog, and a couple of guinea pigs, but I don’t know how anybody is going to beat this unless they have an elephant.”
Pupils from the school were invited to look at Dragon, who has won a series of top prizes at this year’s county shows, while Thomas and his parents Ian and Sophie Bell answered their questions about the animal.
Thomas said: “I brought him in because I could show off his trophies.
“I thought about bringing in Tilly, our puppy, but it would have tried to bite everyone and the bull was safer.”
Unfortunately, Dragon couldn’t be brought into the classroom, so the children went out to look at the beast, which is likely to continue growing and could reach around one-and-a-half tons, on the village green.
Mum Sophie added: “The children were very excited. The school secretary said normally they issue consent forms to leave the school premises and struggle to get them back, but this time they had all the forms in straight away.”
.
Posted by The Man at 3:10 PM No comments:

Labels: Animal's, In the News, Kids