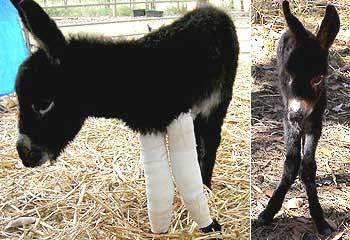 A rare miniature donkey twin born with severely deformed legs is having corrective treatment that may eventually enable him to stand on his own four feet.
Donkey twins Lonegan and Donegan were born at Willowdale Donkey Stud in Western Australia on March 29.
Owner and Perth donkey breeder Barbara Bracken said it was believed there were just four sets of miniature donkey twins in the world. "It’s very rare for twins to live," she said. "Equines don’t carry twins, they either abort both at six months or give birth to one live and one stillborn."
Posted by The Man at 10:54 AM No comments:

Teenage boy jailed for taking call in court
A MAGISTRATE has jailed a teen for answering his mobile phone in court.
The 17-year-old let his mobile ring with the music of US rapper Akon before he answered the call while sitting in the front row of Darwin Magistrates Court yesterday. When the teen "backchatted'' after he was told off, magistrate Daynor Trigg shouted across the courtroom and sent him to the court cells for three hours. The magistrate said he could have confiscated the phone for 28 days for the "rude'' act. "How dare you answer a phone in court ... that allows transmissions from court ... which is a serious contempt,'' he shouted at the teen when he answered the phone.
When the teen waved it off as "my bad'', Mr Trigg ordered he be taken away.
.
Cops pose as pizza deliverers to nab teens
Police in Harrisburg, Pa., said they posed as Domino's pizza delivery workers to nab five would-be robbers who allegedly targeted employees of the pizzeria.Harrisburg city spokesman Matthew Coulter said a Domino's delivery worker told police he thought he was being targeted for a robbery after he arrived at his destination and saw people "lurking in the shadows," The Patriot-News, a Harrisburg newspaper, reported Thursday.
Coulter said a call came in for a delivery at the same address the following night, and a police officer posed as a delivery worker by placing a Domino's placard on an unmarked car. The spokesman said a teenage boy pointed a pellet gun at the officer after he arrived, but fled with four others when the officer identified himself. The undercover officer, along with a second officer hiding in his back seat and other police in the area, chased down the suspects Police arrested four 15-year-old boys and a 14-year-old boy on charges of robbery and conspiracy to commit robbery.
.
Boston Police say 14-year-old's kidnaping was a hoax
Boston Police say they were the victims of a hoax today when they launched a major search for a 14-year-old Dorchester girl who was simply skipping school.
Alexus Clarke, a resident of Monadnock Street, was nervous that her mother might be angry at her for being a truant. So she text-messaged her mother, saying that she was in trouble and being held against her will, said Police Superintendent Daniel Linskey.
"As a father, I feel happy a 14-year-old girl is safe and unharmed. As a police officer, I'm a little upset we wasted some time," said Linskey.
Clarke was reported missing at about 9:30 a.m. She was found by police at about 5:30 p.m.
Linskey said dozens of officers spent hours looking for Clarke, who is in eighth grade at a Boston middle school.
Posted by The Man at 10:47 AM No comments:

McDonald's french fries are now trans-fat-free in all its restaurants in the United States and Canada, the fast-food restaurant chain said Thursday.
McDonald's has lagged other restaurant operators in switching over to a zero-trans-fat cooking oil out of worries it would compromise the taste of its trademark fries. It has been under increasing pressure from consumer advocates and some public officials to make the change.
The new oil is canola-based and includes corn and soy oils.
CEO Jim Skinner told shareholders at the annual meeting at its headquarters in Oak Brook, Ill., that the new oil has been in use in U.S. restaurants for a few months now for french fries, hash browns, chicken, filet of fish and biscuits.
He said McDonald's is on schedule to convert to the new oil by year's end for its remaining baked items, pies and cookies.
Skinner said the company decided not to advertise the changes.
McDonald's Corp. has nearly 14,000 restaurants in the United States.
Posted by The Man at 10:44 AM No comments: 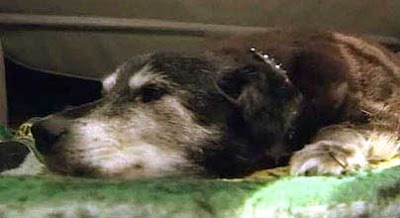 A Derbyshire couple are trying to prove their pet Labrador cross is the oldest dog in the world. Bella's owner David Richardson, 76, said he bought the mixed breed dog from the RSPCA 26 years ago when she was "at least three years old". That would make Bella's age more than 200 in canine years.
But the RSPCA said it does not have any records for Bella and Guinness World Records said without the appropriate paperwork it could not be proved. Mr Richardson said he thought Bella might be the oldest dog in England, but was shocked to realise that she might be the oldest in the world. His partner Daisy Cooper said Bella was showing signs of her age, but still goes for a walk in the park. She eats little as she has only two teeth left, but loves to suck on sweets.
With news video.
Posted by The Man at 10:40 AM No comments:

The tables were turned when a dog, usually associated with saving people in distress, got himself into a spot of bother on the beach. Arnold, a St Bernard-mastiff cross followed another dog down 130 steps to Whipsiderry beach near Newquay, but was too old - and fat - to climb back up. As the tide came up the beach, Arnold's worried owner contacted coastguard. 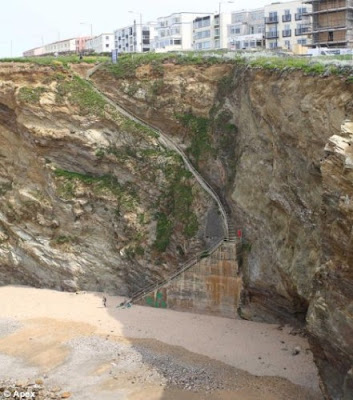 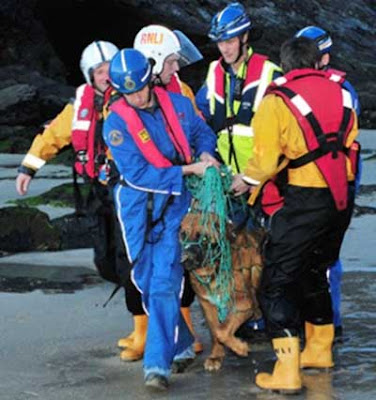 Hungry Bunch of Mouths to Feed 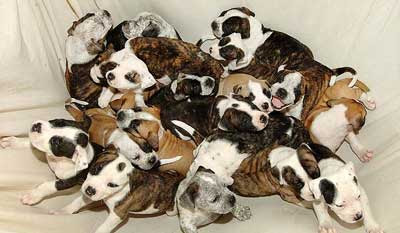 This bundle of fur is believed to be the biggest litter ever, an amazing TWENTY pups.
The normal number of pups for the breed is around ten.
The litter is now set to go in the Guinness Book of Records.