.
Tattoo Jim said...
This was so cute... do you think she'll grow up to be a talk show host?
I hope she doesn't burn out before then.
.
Even though this was cute
I'm wondering what's going to be like when she grows up and gets married?
Poor guy won't be able to get a word in edge wise.
.
Posted by The Man at 1:35 PM No comments:

A Jersey City truck driver has gone to extremes to avoid paying tolls, police said.
Allan Flores, 50, has been arrested for allegedly rigging his license plate to avoid toll cameras on the George Washington Bridge.
Flores is charged with theft of services and deceptive business practices. It is not immediately clear if he has retained a lawyer.
Port Authority spokesman Pasquale DiFulco told The Record of Bergen County on Friday that Flores rigged the plate with a hinge and wire that ran into the cab of his truck.
The hinge could be activated from the truck cab, lifting the vehicle's real license plate to reveal a grease-smudged plate underneath it.
.
Posted by The Man at 10:18 AM No comments:

What's a father to do? 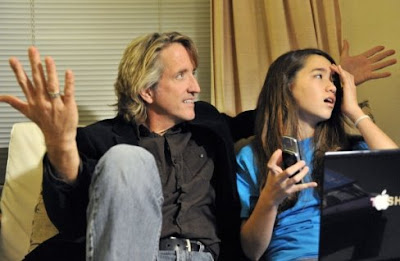 My daughter racked up 14,528 text messages in one month
Greg Hardesty of Silverado Canyon, Calif is more than speechless. He's textless. The PDF version of his family's cellular bill from Nov. 27 to Dec. 26, totaled 440 pages. Although three people are on the bill, his 13-year-old daughter Reina, right, alone racked up 14,528 text messages.
Thank God she's too young to drive.
I'm no math whiz, but I did some quick calculations on Reina's thumb-numbing total.
Assuming my daughter slept an average of eight hours during the billing period (she usually sleeps more), that works out to 484 text messages a day — or a text message every two minutes she was awake.
Could AT&T have made some mistake?
Wishful thinking. It's all true, based on the PDF file I reviewed.
One small consolation: The 14,528 total includes text messages both sent and received.
.
Posted by The Man at 10:11 AM No comments:

Labels: Family, In the News, Technology

MILLIE OPENS THE DRIER DOOR FOR HER BLANKIE

It's a baby, not kidney stone!

A Canadian woman did not know she was pregnant till she delivered a healthy seven-pound baby boy. Thirty-six-year-old Juanita Stead, a native of Newfoundland province, went to hospital with sharp lower back pain, thinking she had kidney stones.
On her X-ray examination, doctors found no signs of kidney stones. Instead she was told that she is pregnant and about to deliver a baby.
"It's no kidney stone. You've got a baby ready to be born,'' doctors told the shocked woman.
"No, that can't happen. You had the wrong X-ray file,'' she said in protest.
But in the next six minutes, she delivered a healthy seven-pound, 12-ounce boy born - at 12:31 a.m. local time on New Year's Day.
Named Nicholas, the boy has become one among the first Canadian babies born in the New Year. Her husband Terry said, Honest to God, I just don't have words to explain it.''
The woman said she never experienced any pregnancy-related symptoms such as morning sickness, kicking in her womb or anything else.
.
Posted by The Man at 8:49 AM No comments:

LOVE is in the air. Literally. 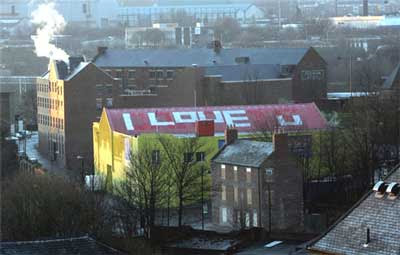 Hunt on for Romeo who left love message. As romantic gestures go, this one 50ft up on the Tyneside skyline will take some beating.
The so-called Byker Romeo has declared their love by hijacking a huge sign above a carpet store.
Staff at Storey’s Carpets in Cut Bank, Byker, Newcastle, were surprised to find that the giant white ‘CARPETS’ lettering which has been on top of their red roof for years had been replaced with ‘I LOVE U’.
The 15ft letters have been manipulated to send out a city-wide message to a sweetheart.
The enormous love message is visible for miles and is causing a stir with motorists passing over Byker Bridge and has even been spotted by low flying aircraft.
Now Storey’s staff are desperate for the person to come forward, and the old romantics have promised not to take police action.
Natalie Raine, marketing manager for Storey’s Carpets in the North East, said: "We’re all really curious as to who the Byker Romeo is.
"They must have spent hours painting out the existing sign.
"Some of our staff who drive into work across Byker Bridge couldn’t believe their eyes when they saw it.
"We all think it’s wonderful and there’s no way we want to take any action against the person who did it.
"It’s really romantic and we just want to know who did it and who he or she made the message for. We don’t even have any immediate plans to restore the sign to the way it was because it’s touched our hearts so much."
Natalie says the passionate paint job must have been carried out some time between Christmas and New Year’s Day.
And it must have been a labor of love as the sign sits high up on the store.
"Whoever did this must be besotted," said Natalie. "You wouldn’t make this much effort if you weren’t really in love.
"I think whoever the message was intended for could be a very lucky man or woman."
.
Posted by The Man at 8:43 AM No comments: