The departure of USS New York 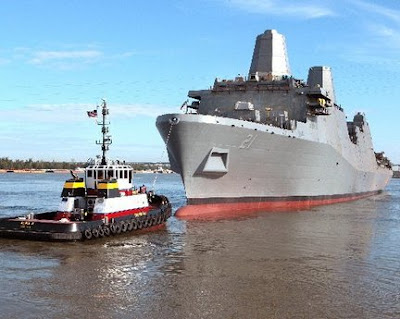 Under the threat of rain and a veil of security, the USS New York will leave the New Orleans area Tuesday morning after more than three years of construction at Avondale, feted by what organizers hope will be thousands of people gathered along the Mississippi River to see the ship off.
The USS New York will leave Avondale on Tuesday at bout 7 a.m., and officials are asking people to line the banks of the Mississippi River to give the ship a New Orleans-style sendoff. The ship—, whose bow stem contains about 7 1/2 tons of steel from the World Trade Center, felled during the Sept. 11, 2001, terrorist attacks — also will receive two 21-gun salutes during its trek from Northrop Grumman’s Avondale shipyard to the Gulf of Mexico.
The USS New York will head to its namesake city, where it will be commissioned Nov. 7. Then it will move to its homeport of Norfolk, Va.
The ship departs Avondale at 7 a.m. with a Coast Guard escort.
When it passes the city of Gretna, around 7:45 a.m., it will be greeted by a police honor guard and emergency vehicles, which will flash their lights in honor of the 343 firefighters and police officers who died in the World Trade Center. That event will take place at the Riverfront Amphitheater.
The ship is expected to pass by Woldenburg Park around 8:15 a.m., where organizers hope it will be greeted by thousands. About 3,000 flags will be distributed, organizers said.
..
Posted by The Man at 8:30 PM No comments: