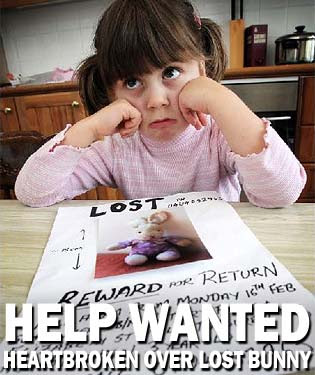 A missing family member has sparked a city-wide search and the offer of a reward.
Marti Ottaway has spend the past week scouring the city looking for a missing toy rabbit that belongs to her daughter Sophia.
Missing posters have been placed around the city carrying a photo of the lost 15cm plush toy that has left her 3½-year-old heartbroken.
"She just loves her rabbits. There are three of them and she takes them everywhere," Mrs Ottaway said.
"We have searched everywhere but there has been no sign yet."
Mrs Ottaway said she was walking with her children to visit her husband for lunch at the Royal Hobart Hospital.
Because the much-loved and adored rabbits – named Roughy, Smiley and Cryie – travel everywhere with Sophia, they were being held in the pram during the journey.
However upon arriving at the hospital they discovered Cryie was gone.
It was dropped somewhere between Battery Point and the Elizabeth Street Mall via St David's Park and Franklin Square.
"She said, 'Mum, I have lost my rabbit' and started to cry," Mrs Ottaway said.
"We retraced our steps but unfortunately didn't find him.
"A lady actually said that she had seen a toy rabbit in a tree in St David's Park but when we got there we found it was a different toy.
"We have also phoned local businesses and Metro to see if anyone handed it in, but again nothing yet."
She said the three identical rabbits were purchased after Sophia showed an interest in a toy rabbit as a baby.
The trio were purchased and they have not left her clutches since.
Sadly Mrs Ottaway said the toys had been discontinued.
"She was sick last week and crying for him. It is heartbreaking.
"I just hope someone may have picked him up and we can get him back."
Anyone with information can call 0404 532 963.
.
Posted by The Man at 12:14 PM No comments: