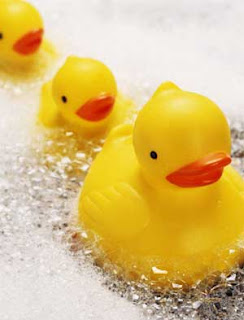 Rubber ducks are being used to help scientists understand global warming and melting glaciers.
NASA researchers have dropped 90 ducks into holes in Greenland's fastest moving glacier, the Jakobshavn Glacier in Baffin Bay, between Greenland and Canada.
The toys have each been labeled with the words "science experiment" and "reward" in three languages, along with an e-mail address.
If they are found scientists will be able to track how the water moves through the ice and provide information about the movement of glaciers. Scientists are still unsure about why glaciers speed up in summer and head towards the sea.
One theory is that the summer sun melts ice on top of the glacier's surface, creating pools that flow into tubular holes in the glacier called moulins.
These moulins carry some water to the bottom of the glacier, where it acts as a lubricant to speed the movement of ice toward the coast.
The Jakobshavn Glacier is believed to be the source of the iceberg that sank the Titanic in 1912 and is important to researchers because it discharges nearly 7 per cent of all the ice coming off Greenland.
Alberto Behar of NASA's Jet Propulsion Laboratory in California said none of the ducks had been reported yet.
"We haven't heard back but it may take some time until somebody actually finds it and decides to send us an e-mail that they have found it," he said.
"These are places that are quite remote so there aren't people walking around."
Posted by The Man at 9:04 AM No comments: