Firemen to the rescue 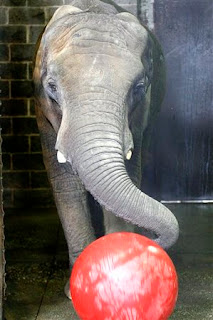 A veterinarian said colic or a bellyache may be to blame for weakening Maggie the elephant, whom firefighters hoisted to her feet after she couldn't stand on her own Sunday.

Anchorage firefighters used straps and a winch to lift Maggie on Sunday evening after she had lain down between 10 and 19 hours at the Alaska Zoo in Anchorage. The compressed weight of the animal's bulk could have caused breathing and other problems, or even have killed her.

The incident renewed calls for the 25-year-old African elephant to be transferred somewhere where she can exercise more and be around other elephants.

"It's time to get her out of Alaska," said veterinarian Elliot Katz, president of the San Rafael, Calif.-based In Defense of Animals. "The longer the wait, the more this unnatural and abusive environment will cause severe damage to her feet and joints, until it becomes irreversible."

Zoo officials said the 7,500-pound elephant seemed fine Monday and is walking around and eating normally. Blood tests are under way to determine what led to the incident, said zoo director Pat Lampi.
Posted by The Man at 3:30 PM No comments: 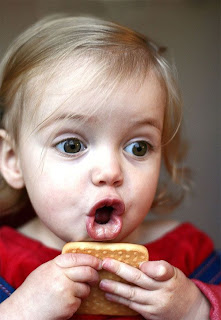 Where did you say you got it from?

Have you ever wonder 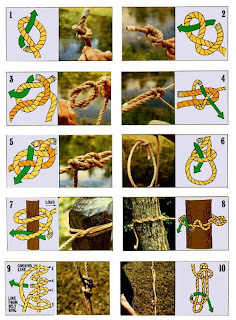 A man was sitting on the edge of the bed observing his wife turning back and forth, looking at herself in the mirror.

Since her birthday was not far off, he asked what she'd like to have for her Birthday.

“I'd like to be six again,” she replied, still looking in the mirror.

On the morning of her Birthday, he arose early, made her a nice big bowl of Lucky Charms, and then took her to Six Flags theme park.

He put her on every ride in the park; the Death Slide, the Wall of Fear, the Screaming Monster Roller Coaster... everything there was.

Five hours later they staggered out of the theme park. Her head was reeling and her stomach felt upside down.

He then took her to a McDonald's, where he ordered her a Happy Meal with extra fries and a chocolate shake. Then it was off to a movie (with) popcorn, a soda pop, and her favorite candy, M&M's.

What a fabulous adventure!

Finally she wobbled home with her husband and collapsed into bed exhausted.

He leaned over his wife with a big smile and lovingly asked, "Well, Dear, what was it like being six again??"

Her eyes slowly opened and her expression suddenly changed.

The moral of the story:
Even when a man is listening, he is going to get it wrong when it comes to women
Posted by The Man at 9:06 AM No comments:

Chinese woman had bullet in head for 64 years

A Chinese grandmother who went to hospital with a headache was found to have had a bullet in her head for 64 years.Jin Guangying, 77, of Shuyang town, Jiangsu province, went to to Shuyang Leniency Hospital for an x-ray."We were surprised to learn there was a bullet inside her head," her son, Wang Zhengbang, told the Yangtse Evening Post. 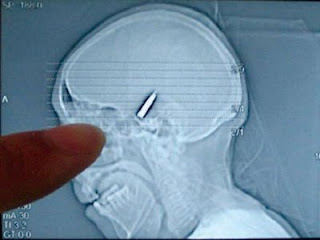 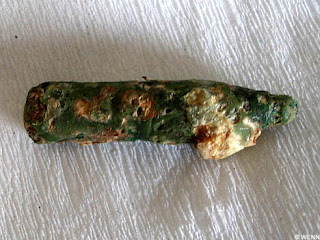 Jin remembers that she was shot in 1943 during the Second World War by the invading Japanese army when she was taking supplies to her guerrilla father. She later learned that the bullet had gone through the arm of a person beside her before hitting her head. The chief surgeon, who removed the rusty bullet, was amazed it had remained in her head for so long without causing major problems. "The fact that the bullet lost strength and speed passing through another person, and that the point it struck is not vital, may explain her survival," he said.
Posted by The Man at 7:25 AM No comments:

Here are the 10 most common passwords.
If you use one of these, you’d better change it.


http://tech.yahoo.com/blogs/hughes/11844/most-common-passwords
Posted by The Man at 7:21 AM No comments:

His head will be alright but, bike helmet crushed.

"Delivery Truck Runs Over Bicyclist's Head and Gets Away?" 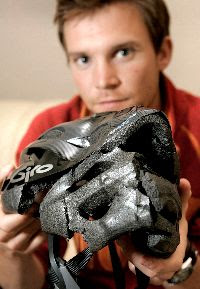 A white paneled delivery truck ran over a UW-Madison graduate student's head on Division Street Friday afternoon and, except for a concussion, he wasn't hurt.
Ryan Lipscomb, 26, said he was riding his bicycle pretty fast down the East Isthmus Bike Path where it parallels Eastwood Drive on Madison's east side just before 3 p.m. Eastwood had a green light, so the crosswalk for the bike path showed a white walk sign, Lipscomb said.
He saw the large truck, the kind that usually makes deliveries to offices, coming down Eastwood, preparing to make a right turn onto Division Street. Lipscomb said he could tell the truck wasn't going to stop. So Lipscomb slammed on his brakes, flipping his bike and throwing himself into the street. He landed right at the intersection of Eastwood and Division.

"I didn't see it coming, but I sure felt it roll over my head. It feels really strange to have a truck run over your head."
http://www.madison.com/tct/news/index.php?ntid=133934
Posted by The Man at 7:06 AM No comments: 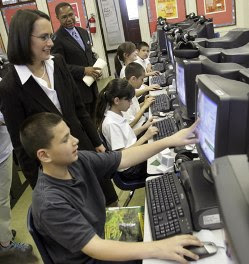 More than half of children using the internet have had an "unwanted experience" online as the trend of using social networking sites increases, according to a new poll.

The survey for the NSPCC found 50.4% of children had such an experience, which could mean anything from being bullied or threatened to being asked to perform sexual acts.

More than half of children (52%) now use sites such as Bebo and MySpace at least once a day, according to the poll, heightening their exposure to those who could potentially abuse them for their own ends.

The top reason cited by young people for logging on to the sites was to make new friends (89%) and to link up with people they already knew (79%).

But the survey for children's charity also showed almost 60% of children resort to them to stop themselves feeling alone and 53% use them to share their problems.

The findings of the online poll of 2,053 children mostly between the ages of 11 to 16 were revealed as this year's Don't Hide It campaign is launched.

It aims to encourage children to speak out about all forms of abuse perpetrated through social networking sites, following on from last year's campaign about sexual abuse.

NSPCC director and chief executive Dame Mary Marsh said: "Children face real threats on the internet such as sexual grooming, cyber-bullying, exposure to violent, pornographic and other unsuitable material and being lured into dangerous real-world situations.

"Online social networking is part of millions of children's lives. We must recognize and respond to this reality by helping them be safer online as well as helping them speak out about abuse at the same time."

Previous research has shown that one in three young people regularly using the internet have received unwanted sexual comments, according to the NSPCC.

Think you're stretching your gas dollars by killing the air conditioning or buying your gas on Wednesday? Think again.

NEW YORK (CNNMoney.com) -- Using a special additive or cutting off your A/C won't really cut your gasoline consumption. But myths like these run rampant in the minds of American drivers.
Right now, the price of gasoline is (once again) approaching nose-bleed levels. Last week the nationwide average for a gallon of regular unleaded self-serve gasoline climbed to $3.07 a gallon.
So before you attempt a half-baked scheme to stretch your gas dollars, here's a look at what's fact and what's fiction when it comes to fuel economy:

Nothing but gimmicks
There have been additives, special magnets and even a pill that has promised to improve a car's fuel efficiency by as much as 30 percent in some cases.
While the promise of stretching your gas dollars seems awfully lucrative, especially when they cost under $20, most of these products provide a negligible, if any, improvement in fuel efficiency, said Rik Paul, the automotive editor for the publication Consumer Reports.
Consumer Reports and the government's Environment Protection Agency, have tested dozens of these products finding that none of them offer any significant improvement in fuel economy.
"With all the pressure car companies are under, if one of these inexpensive devices dramatically did improve fuel economy, they (automakers) would be all over it."

Windows, air conditioning.
There's the old saw that leaving your windows rolled down creates an aerodynamic drag on your car, cutting down on fuel efficiency. And there's the notion that the fastest way to drain your gas tank is by running your air conditioning.
Don't believe either one.
In two separate studies conducted in 2005, the automotive Web site Edmunds.com and Consumer Reports compared the fuel economy of both a sedan and an SUV at highway speeds with and without air conditioning and how open windows affected gas usage.
What they found was no significant difference in fuel economy in either sedan or SUV under either condition.

Don't wait until Wednesday
Some drivers insist the best time to buy gasoline is on a Wednesday, when pump prices have cooled from the weekend run-up when oil companies typically raise prices.
That's true to a point, says Tom Kloza, chief oil analyst at the Oil Price Information Service. Gas prices tend to be higher on the weekend, but there's no ideal day of the week to purchase your gas.
Geoff Sundstrom of the motorist organization AAA notes that gas prices fluctuate from day to day and are determined by gas station owners who look at a variety of factors including wholesale gasoline prices, competitors' prices and food and drink sales if they have an attached convenience store.
Drivers who want to bargain-hunt for inexpensive gas should instead check out Web sites like Gasbuddy.com, which allows consumers to find the cheapest gas in their area simply by entering their zip code.

Restart your engines
It's probably a myth that goes back to the days when cars were equipped with carburetors, but many drivers believe that starting up and turning off your car repeatedly is a fast way to drain your gas tank.
But because of modern fuel-injection technology, drivers actually save gas by turning off their engine than letting their car needlessly idle, says Consumer Reports' Paul.
Granted it's probably not sensible shutting down the engine every time you get stuck in traffic, but if it looks like you might be at the drive-thru for more than 30 seconds to a minute, it's worth turning off your car.