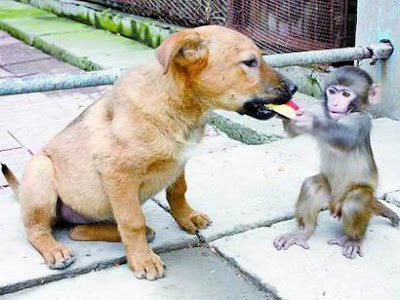 Unlikely best pals
A pet puppy has become best friends with a caged monkey at a Chinese zoo.

The dog is owned by a keeper at Nanhai Zoo, at Zhumadian city, who takes her pet to work with her.
She told the Dahe Daily newspaper that she noticed a bond developing between the pair about a month ago.
"When the dog walked toward the cage, the monkey inside started to shriek," said the woman.
And, as the six-month-old dog visited the monkey more often, they developed a close friendship.
The monkey would feed the dog bananas and grooms its hair, while the dog would let the monkey ride on its back.
A spokesman for the zoo said it was happy for the dog to spend its days in the monkey's cage as the unlikely double act was proving a hit with visitors.
.
Blind pilot guided to land by RAF pilot
A pilot who suddenly went blind while flying his plane at 5,500ft (1,676m) was guided in to land by an RAF plane.
A plane was scrambled from the RAF base at Linton-on-Ouse in North Yorkshire to help stricken pilot Jim O'Neill, 65.
He was flying a two-seater Cessna aircraft from Glasgow Prestwick Airport to Colchester, Essex, when he suffered a stroke and lost his sight.
The RAF plane flew alongside Mr O'Neill and the pilot shepherded him to the base with instructions over the radio.
Mr O'Neill, who has 18 years' flying experience, was overhead at RAF Leeming in Northallerton when he encountered difficulty and sent a mayday alert last Friday.
News Video and More
.
Zoo hires redcoats for animals
A Swiss zoo has taken on a team of Butlins' style redcoats - to keep the animals entertained.
The plan is to have one of the professional motivators on hand at all times to stop the animals getting bored.
The new zoo animal entertainment squad will start in January and are currently designing games and puzzles for animals.
Animal psychologist Jennifer Ringleb said: "In nature, animals spend their whole day looking for food. In zoos they have nothing to do, they get bored.
"In extreme cases they will get sick or aggressive. Animals that have something to do are happier and more balanced."
The redcoats will have footballs, plastic bags, cardboard boxes or blocks of wood to make toys and challenges for the animals.
.
Posted by The Man at 11:36 AM No comments: 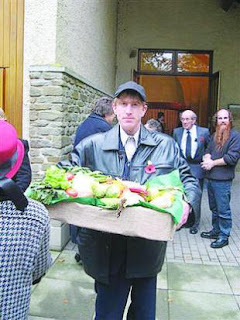 The family of a green-thumb Herefordshire man arranged a bouquet of vegetables rather than flowers at his funeral last week.
Ernest Shelley, who was known as Robin, died at Ross Community Hospital last month, aged 92.
During his retirement, Mr Shelley had kept a large garden from which he supplied relatives with fresh vegetables. He had no time for growing flowers and his family decided it would be more fitting to provide a vegetable tribute at his funeral at Cinderford Crematorium last Wednesday.
Mr Shelley was born in Hockley, Essex, in 1915 and his father was a thatcher – a trade which the family worked in from 1807. He started as a thatcher and moved into farming. He became a leading farm hand and farm manager in Canvey Island, Essex.
He married Elsie, now aged 92, in 1938 and the couple had two daughters, Judy and Gillian. The couple retired to Bromsash, near Ross-on-Wye, in 1974 and their two daughters both live nearby.
Mr Shelley had been active until spring this year. He was admitted to Ross Community Hospital in October where he died with his family by his side.
He is survived by Elsie, two daughters, four grandchildren and two great-grandchildren.
Posted by The Man at 8:35 AM No comments: