Passengers were asked to be ballast because of jammed cargo door 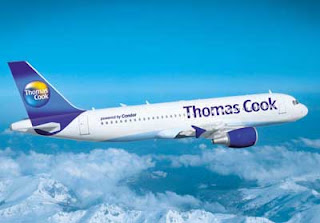 More than 70 holidaymakers refused to fly on a Thomas Cook charter jet to from Majorca to Newcastle after being asked to act as ballast to help redistribute the weight.
The tourists were more than a little surprised to be told they would have to sit at the back of a flight home from the Spanish island because of a problem in the plane’s cargo hold. Some of them were terrified.
A malfunction had apparently caused a door in the cargo hold to jam.
The travelers’ luggage could be stowed only in the front portion of the aircraft.
To counteract the imbalance, they were told to give up their allocated seat numbers and go to the rear of the passenger cabin.
The travelers said their fears were heightened when incoming tourists leaving the plane said it had been one of the worst flights they had experienced.
As a result, a total of 71 holidaymakers declined to get on the Thomas Cook flight, choosing instead to pay hundreds of pounds extra to make their own way home on other airlines.
.
Posted by The Man at 4:52 PM No comments: