For you Cat Lovers

The SnoozePal™ Hammock-in-a-Box
Here is a box in which your cat will happily hang out for hours. Made of heavy-duty cardboard, it encloses a comfy hammock to snuggle in, gives your kitty an elevated spot off the ground, and has porthole windows to keep an eye on the neighborhood. What else does a happy cat need?
And, yes, the box is extremely durable and its hard, smooth surface discourages scratching. SnoozePal™ is absolutely the cutest thing ever!
.
Elegant cat hammock will make you and your cat happy!
This is the cat hammock your cat will love, the best cat bed to rest in, especially after some vigorous cat tree climbing. The cat hammock molds to your cat's shape, providing it with a sense of warmth, security, and ultimate comfort.
.
Posted by The Man at 2:40 PM 1 comment:

Girl earned all 33 badges... by the age of nine

When Rebecca Hooper joined the Cubs, she was determined to be more than just one of the pack.
It took her little more than a year to earn all 33 available activity badges.
She has become the first girl in the country and, at the age of nine, the youngest Cub of either sex to achieve the feat. 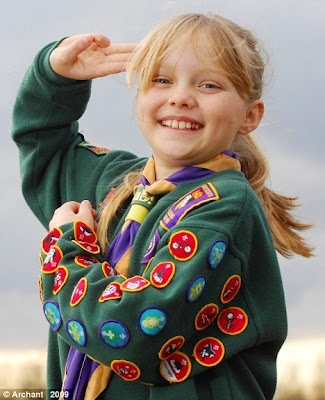 Rebecca, who was ten this month, has been saluted for her 'determination and
enthusiasm' by the Scout Association after mastering activities ranging from astronomy to animal care and DIY to martial arts.
Girls have been allowed in the Cubs since 1991, and Rebecca chose them over the Brownies because she found their activities more appealing.
She set to work after a pack leader jokingly told her that she needed to 'pass all the badges' before she could achieve her silver Scouting award.
Rebecca, of Toft Monks, near Beccles, Norfolk, hopes to become a vet and particularly enjoyed looking after her family's pets for the animal career badge. 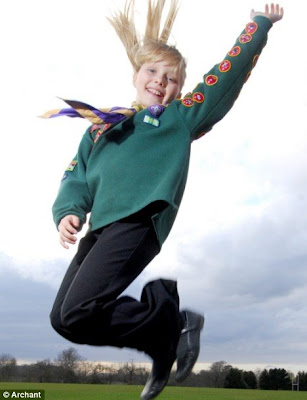 Triumphant: Rebecca is the youngest UK member of the scouting movement ever to have earned all 33 activity badges
For the Air Activities badge, she took her first flight in a small private aeroplane, which was organised by her stepfather Mik Horn, an IT technician, who has a private pilot's licence.
Other badges saw Rebecca also attend judo lessons, make a computer desk, cook her family a roast dinner, repair a puncture on her bicycle, visit a synagogue, learn how to read a map, sail a boat and tidy up her local churchyard.
Her mother Helen Horn, a teacher, said: 'I am really proud of her. She has been really dedicated and has had to work very hard to achieve this.'
Rebecca's passion for Scouting is in the blood. Her mother was a Queen's Guide, the highest Girl Guide award in her day, and her grandfather ran a Scout troop.
Rebecca, a pupil at Glebeland Primary School, will join the Sea Scouts in September - and her next aim is to get all their 60 badges. Her brother Ben, 12, is in the Sea Scouts, who meet in the same hall on the same night as her Cub pack.
There is clearly something in the Norfolk air that inspires the Cubs - last year the Mail told how ten-year-old Ben Spratling, from Norwich, won all 33 badges along with Leon Johnson, also ten, from Stockport. 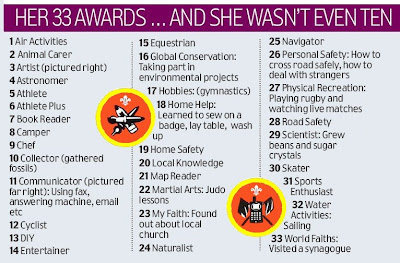