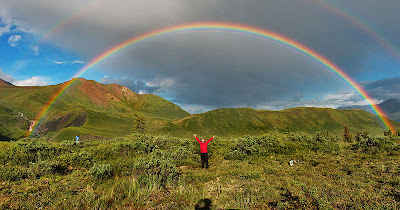 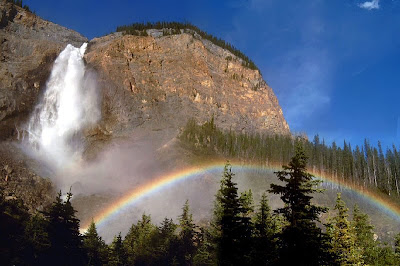 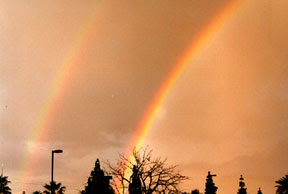 The Double Rainbow
Every once in a while, if you get lucky, you may see a second rainbow on the outside of the first, brighter rainbow. This is the "secondary rainbow" which occurs when raindrops high in the atmosphere refract and reflect light back to the viewer.

Chimp and tiger cubs being friends 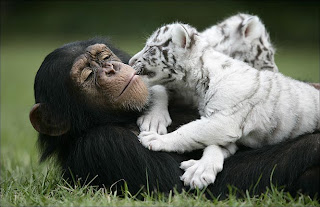 NY election mix-up: 'Osama' on the ballot
Who is running for president? In an upstate New York county, hundreds of voters have been sent absentee ballots in which they could vote for "Barack Osama."
The absentee ballots sent to voters in Rensselaer County identified the two presidential candidates as "Barack Osama" and "John McCain." In the United States, the best-known individual named Osama is Osama bin Laden, leader of the al Qaida terrorist group behind the 2001 attacks that destroyed the World Trade Center in New York City.
.
Retailers start eco-friendly packaging as cost-saving measure
Due to the soaring prices of raw materials, retailers are trying to cut costs with measures to reduce packaging, such as simplifying plastic wrapping and abandoning the use of polystyrene trays.
Retailers also hope that this new positive attitude toward garbage reduction will appeal to eco-conscious consumers and thereby boost sales.
Convenience store chain FamilyMart is changing the way it packages about 70 percent of its lunch boxes. Although the entire box used to be covered in plastic wrap, the company is planning to now only cover the area where the box meets the lid, a move that could reduce the amount of plastic wrap used by about 60 percent.
.
Posted by The Man at 3:10 PM No comments: