An off-duty Jacksonville Sheriff's Office deputy was hurt Wednesday when her hand was trapped between her police-issued Glock handgun and the powerful magnet inside an MRI machine.
Police said Joy Smith was in the MRI room with her mother when she apparently forgot about her gun, which was pulled by the magnetic force of the machine, trapping her hand between the gun and the MRI.
Smith was able to free herself, but the gun remained stuck for hours while the machine was powered down, which takes 24 hours. Jacksonville Beach police said Smith's hand was injured and she had difficulty bending her thumb, but it was not known if she sought medical treatment.
VIDEO
.
Posted by The Man at 4:15 PM No comments: 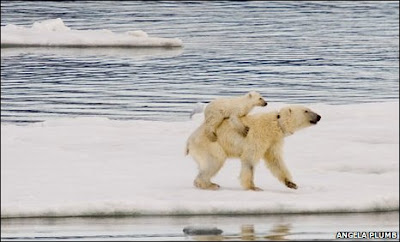 Arctic waters are at best chilly and at worst close to freezing.
This may explain why a polar bear cub has recently been seen riding on the back of its mother as the bears swim across parts of the Arctic Ocean.
The cub then briefly rode her back as she clambered out of the icy water, a unique event photographed by a tourist.
Experts have rarely seen the behavior, and they say the latest find suggests it may be a more common practice than previously thought.
Posted by The Man at 4:10 PM No comments:

Little dog with a lot to say

French bull dog funny barking
.
Posted by The Man at 4:07 PM No comments: