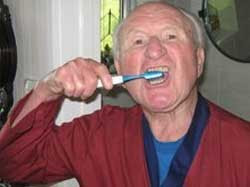 A hospital resuscitation team was given a shock after responding to a heart attack call only to find an electric toothbrush had set off the alarm. Leonard Stannett, 76, from Somerton, a patient in the cardiac ward at Yeovil District Hospital, Somerset, was hooked up to a heart monitor at the time. Mr Stannett said he heard a knock at his door and opened it to find the crash team ready for action. The team checked he was fine and he thanked them for their professionalism. Mr Stannett had been taken into hospital on 21 July after suffering from chest pains for two days. He was seen by the accident and emergency team, given a bed on the cardiac ward and fitted with a heart monitor.
"I was brushing my teeth when there was a banging on my door and there were all these nurses with jump leads ready," said Mr Stannett. "I stood there with foam around my mouth and said 'god, they think I'm having a heart attack or a fit'. "As soon as I said 'I'm brushing my teeth' you could see the change in the people's expressions, just sheer relief followed by raucous laughter. I want to thank the staff at Yeovil for their absolute professionalism and their dedication," he added. The nurses told Mr Stannett the toothbrush had sent a signal from his heart monitor to the coronary care unit monitor which had gone "off the screen".
.
Posted by The Man at 2:51 PM No comments: 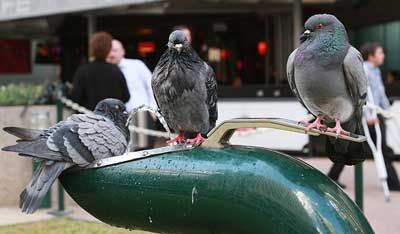 Three pigeons help each other cool off on a hot day - by pressing down the tap on a water fountain.
Passers-by watched in amazement as they took turns to sit on the lever while the other two supped in Brisbane, Australia.
An onlooker said: "They were clearly birds of a feather."
Posted by The Man at 10:56 AM No comments: