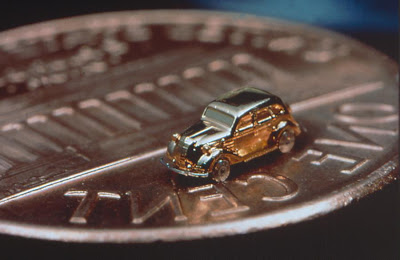 "The current Guinness Book of Records for the world-s smallest motorized car. It is a miniature version of Toyota-s first passenger car, the 1936 Model AA sedan. Its size is astounding: 1/1000th the size of the actual car or about the size of a grain of rice. Dimensions are: 4.785 mm long, 1.73 mm wide and 1.736 mm tall. The car has a total of 24 parts which come in 13 different types including body, tires, spare tire, wheels, axle, bearings, headlights, rearlights, front bumper, rear bumper, step, number plate and emblem."
.
Read More About It
Posted by The Man at 3:25 PM No comments:

Lucy you got some explaining to do

But Ricky it wasn’t my fault
Posted by The Man at 9:06 AM No comments:

Charging by the Byte to Curb Internet Traffic

Some people use the Internet simply to check e-mail and look up phone numbers. Others are online all day, downloading big video and music files.
For years, both kinds of Web surfers have paid the same price for access. But now three of the country’s largest Internet service providers are threatening to clamp down on their most active subscribers by placing monthly limits on their online activity.
One of them, Time Warner Cable, began a trial of "Internet metering" in one Texas city early this month, asking customers to select a monthly plan and pay surcharges when they exceed their bandwidth limit. The idea is that people who use the network more heavily should pay more, the way they do for water, electricity, or, in many cases, cellphone minutes.
That same week, Comcast said that it would expand on a strategy it uses to manage Internet traffic: slowing down the connections of the heaviest users, so-called bandwidth hogs, at peak times.
AT&T also said Thursday that limits on heavy use were inevitable and that it was considering pricing based on data volume. "Based on current trends, total bandwidth in the AT&T network will increase by four times over the next three years," the company said in a statement.
All three companies say that placing caps on broadband use will ensure fair access for all users.
Posted by The Man at 8:53 AM No comments: 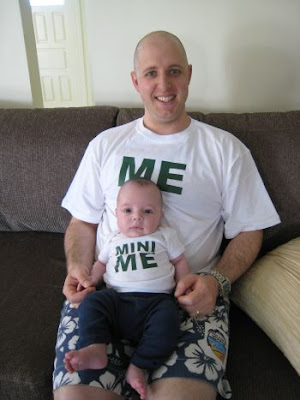 .
Mama cat comes to rescue her little kitten
Posted by The Man at 8:18 AM No comments: 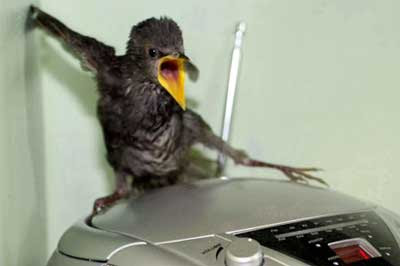 Baby birds being cared for in RSPCA centers are being taught to sing using CD recordings of the dawn chorus. The scheme follows a study carried out by the animal charity, which showed it could help birds reared in captivity before they are released into the wild. The study found it helps them become good singers which in turn will help them survive when they are set free. As a result CD recordings are being played twice a day to the hundreds of fledglings at RSPCA wildlife centers.
Dr Andrew Kelly, director of Stapeley Grange Wildlife Centre & Cattery in Nantwich, Cheshire, said the study showed most bird species benefitted from being played birdsong. "The ability to sing is extremely important to the males of most bird species because it is vital for them to form and then defend their own territory and find a mate," he said. "Female birds in many species choose a partner based on the way they sing." "Birds learn to sing from their parents so being reared in captivity can mean that they don't know how to sing properly."
Posted by The Man at 8:14 AM No comments: