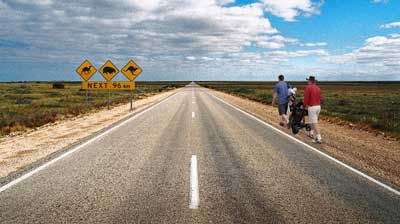 Covering roughly the same distance as Land's End to John O'Groats, it is a golf course that requires a driver at every single hole.
Australia's Nullarbor Links is the largest course in the world, crossing two time zones and encompassing some of the flattest, driest terrain on the planet.
It spans two states, stretching 848 miles from Ceduna in the south to the old gold mining town of Kalgoorlie in Western Australia.
The holes are so far apart that players will have to be bused from one to the next and are likely to encounters some native Australian wildlife, including kangaroos, bush turkeys, emus, snakes and, of course, flies, on their way.
.
Posted by The Man at 11:12 AM No comments:

Labels: In the News, Sports

The police thought that these little kittens were criminals.
.
Posted by The Man at 11:10 AM No comments: