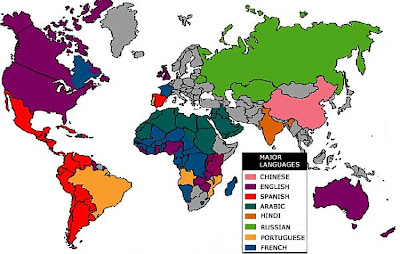 1. Mandarin - Number of speakers: 1 billion+
The most widely spoken language on the planet is based in the most populated country on the planet, China. Beating second-place English by a two to one ratio, but do not let that lull you into thinking that Mandarin is easy to learn. Speaking Mandarin can be really tough, because each word can be pronounced in four ways (or "tones"), and a beginner will invariably have trouble distinguishing one tone from another. But if over a billion people could do it, so could you.

2. English - Number of speakers: 508 million
While English does not have the most speakers, it is the official language of more countries than any other language. Its speakers hail from all around the world, including the U.S., Australia, England, Zimbabwe, the Caribbean, Hong Kong, South Africa and Canada. And you probably feel pretty comfortable with the language already.

3. Hindustani - Number of speakers: 497 million
Hindustani is the primary language of India's crowded population, and it encompasses a huge number of dialects (of which the most commonly spoken is Hindi). While many predict that the population of India will soon surpass that of China, the prominence of English in India prevents Hindustani from surpassing the most popular language in the world. If you are interested in learning a little Hindi, there is a very easy way: rent an Indian movie. The film industry in India is the most prolific in the world, making thousands of action/romance/ musicals every year.

4. Spanish - Number of speakers: 392 million
Aside from all of those kids who take it in high school, Spanish is spoken in just about every South American and Central American country, not to mention Spain, Cuba, and the U.S. There is a particular interest in Spanish in the U.S., as many English words are borrowed from the language.

5. Russian - Number of speakers: 277 million
One of the six languages in the UN, Russian is spoken not only in the Mother Country, but also in Belarus, Kazakhstan, and the U.S. (to name just a few places).

6. Arabic - Number of speakers: 246 million
Arabic, one of the world's oldest languages is spoken in the Middle East, with speakers found in countries such as Saudi Arabia, Kuwait, Iraq, Syria, Jordan, Lebanon and Egypt. Furthermore, because Arabic is the language of the Koran, millions of Moslems in other countries speak Arabic as well. So many people have a working knowledge of Arabic, in fact, that in 1974 it was made the sixth official language of the United Nations.

7. Bengali - Number of speakers: 211 million
In Bangladesh, a country of 120+ million people, just about everybody speaks Bengali. And because Bangladesh is virtually surrounded by India (where the population is growing so fast, just breathing the air can get you pregnant), the number of Bengali speakers in the world is much higher than most people would expect.

8. Portuguese - Number of speakers: 191 million
In the 12th Century, Portugal won its independence from Spain and expanded all over the world with the help of its famous explorers. Because Portugal got in so early on the exploring game, the language established itself all over the world, especially in Brazil (where it is the national language), Macao, Angola, Venezuela and Mozambique.

9. Malay-Indonesian - Number of speakers: 159 million
Malay-Indonesian is spoken in Malaysia and Indonesia. Actually, there are many dialects of Malay, the most popular of which is Indonesian. But they are all pretty much based on the same root language, which makes it the ninth most spoken in the world. Indonesia is a fascinating place; a nation made up of over 13,000 islands. It is the sixth most populated country in the world. Malaysia borders on two of the larger parts of Indonesia (including the island of Borneo), and is mostly known for its capital city of Kuala Lumpur.

10. French - Number of speakers: 129 million
Often called the most romantic language in the world, French is spoken in tons of countries, including Belgium, Canada, Rwanda, Cameroon and Haiti. Oh, and France too.
Posted by The Man at 10:05 AM No comments:

A brother and sister were reunited after 67 years when he moved into the same tiny village as his niece. Jack Allen, 67, struck up a friendship with the local shopkeeper, unaware that she was his sister's daughter. For three years they got to know each other before a chance remark revealed they were related. 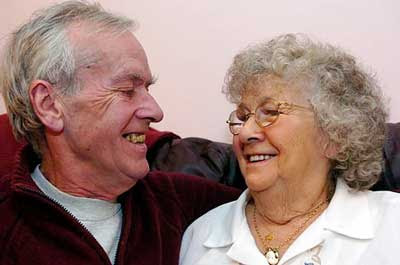 Mr Allen, who was adopted as a young boy, had a further shock when he found out he had nine other siblings. He recently met up with sister Pat Collins, 75, and said he was looking forward to getting to know the rest of his long-lost family. He said: "This is surreal. There was me thinking I was an only child and here I am with my sister - and there are another eight siblings."
More here.

Labels: Family, In the News, Love

I'll have the soup. And the bowl, please 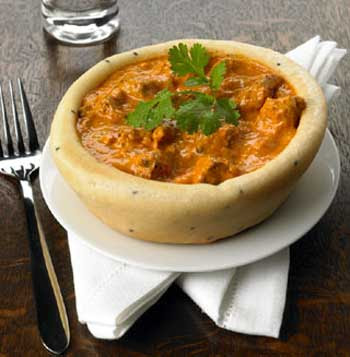 For those who can't stand the washing up, help is at hand with one of the strangest culinary inventions in years - the bread bowl.
A Nottingham food firm has started making bowls and plates out of dough. The idea is that diners enjoy a soup, chilli or curry, then eat the bowl too.
David Williams, the managing director of Butt Foods, which has developed the idea, admits: "Our banks, our investors all thought we were crackers. But we've now proved them wrong."Mr Williams says Butt's bowls hold their shape for eight hours without going soggy.
Posted by The Man at 9:48 AM No comments:

Pretty cool.
Posted by The Man at 9:46 AM No comments:

Pet allowances given to employees of a Japanese firm

A Japanese company is offering its employees a monthly "pet allowance" to help with the upkeep of their cats and dogs. Kyoritsu Seiyaku, which makes animal medicines, said pets were a lifelong obligation for their owners. Kyoritsu Seiyaku is offering its pet-owning employees about $9 (£4.70) per month, and hopes the system will spread to other Japanese firms. The company does not, however, offer paid leave when employees' pets die. "For now, we have introduced only the allowances, but we want to consider the condolence holiday system in future," a spokeswoman for Kyoritsu Seiyaku said.
Posted by The Man at 9:43 AM No comments: