LAWS OF THE NATURAL UNIVERSE

Law of Mechanical Repair: After your hands become coated with grease, your nose will begin to itch or you'll have to pee.
Law of the Workshop: Any tool, when dropped, will roll to the least accessible corner.
Law of Probability: The probability of being watched is directly proportional to the stupidity of your act.
Law of the Telephone: If you dial a wrong number, you never get a busy signal.
Law of the Alibi: If you tell the boss you were late for work because you had a flat tire, the very next morning you will have a flat tire.
Variation Law: If you change lines (or traffic lanes), the one you were in will start to move faster than the one you are in now.
Law of the Bath: When the body is fully immersed in water, the telephone or door bell rings.
Law of Close Encounters: The probability of meeting someone you know increases when you are with someone you don't want to be seen with.
Law of the Result: When you try to prove to someone that a machine won't work, it will.
Law of Biomechanics: The severity of the itch is inversely proportional to the reach.
Law of the Theatre: At any event, the people whose seats are furthest from the aisle arrive last.
Law of Coffee: As soon as you sit down to a cup of hot coffee, you boss will ask you to do something which will last until the coffee is cold.
Murphy's Law of Lockers: If there are only two people in a locker room, they will have adjacent lockers.
Law of Rugs and Carpets: The chances of an open-faced jelly sandwich landing face down on a floor covering are directly correlated to the newness and cost of the carpeting.
Law of Location: No matter where you go, there you are.
Law of Logical Argument: Anything is possible if you don't know what you are talking about.
Brown's Law: If the shoe fits, it's ugly.
Oliver's Law: A closed mouth gathers no feet.
Wilson's Law: As soon as you find a product that you really like, they will stop making it.
Posted by The Man at 4:05 PM No comments:

The king of the jungle doesn't frighten the lion whisperer

Animal behaviorist Kevin Richardson has such an intimate bond with big cats that he can spend the night curled up with them without the slightest fear of attack. Richardson, 32, who is based in a wildlife conservation area near Johannesburg in South Africa, works his unusual magic on other species too. Cheetahs, leopards and even unpredictable hyenas hold no threats for him. 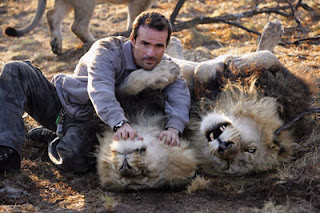 But lions are his favorite. He lavishes them with unconditional love, he says, treating each individual differently, speaking to them, caressing them and, above all, treating them with respect.

A former student of human physiology who once worked with pre and post-operative human patients, Kevin turned to animals ten years ago when he came to the conclusion that he could trust a lion over one of his own kind.
Kevin says he is most confident with animals he has known since birth, but claims he can become close friends with any lion less than a year old, when it is still flexible enough to accept him as part of its own pride.
Posted by The Man at 3:52 PM No comments:

http://www.dailymail.co.uk/pages/live/articles/news/worldnews.html?in_article_id=464471&in_page_id=1811
A 22-mile bridge that its builders claim is the world's longest sea-crossing structure was formally linked-up Tuesday just south of the business hub of Shanghai. The bridge links Shanghai to the industrial city of Ningbo across Hangzhou Bay, cutting the distance between them from about 250 miles to just 50 miles. Costing 11.8 billion yuan (£0.77 billion), the structure will open to traffic next year following completion of the six-lane roadway that will permit vehicles to travel at speeds of up to 62 miles per hour. The bridge, a mix of viaducts and cable-stayed spans to allow shipping to pass beneath, lies just south of the Yangtze River Delta, one of China's most economically vital regions which is undergoing a massive construction boom aimed at boosting transport links.
Posted by The Man at 9:44 AM No comments: