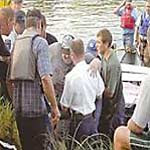 At about 8:15 p.m. Monday, authorities received a call of someone with a medical condition needing assistance.

According to the Pine County Sheriff's Office, a group had gone tubing on the river when Martin Rike's tube went flat about two miles south of Fox Landing.

After attempting to get out of the water and walk back, Rike, 39, began having chest pains. He had also slipped on irregular rocks, injuring an ankle and a knee.

When crews attempted to rescue Rike by boat, they found the water was too shallow, causing the boat to get caught on the rocks.

Dispatch said Rike weighed about 500 pounds and said his weight was a factor in how long it took crews to rescue him.

At 5 a.m. Tuesday, a hovercraft was dispatched to try to retrieve Rike, who authorities said remained alert and conscious throughout his ordeal. Soon after, authorities reported the hovercraft effort had failed.

"Every resource we had simply did not work until we got down to physical manpower," Chief Deputy Ovick said. "The aircraft that found him said they could not lift that amount of weight."

Burnett County authorities said they were trying to recruit a helicopter from Traverse City, Mich., the closest location with a hoist.

Eventually authorities managed to load Rike into a raft made of wood and three canoes.

"There wasn't enough water for it to float, so they physically used that as a stretcher," Ovick said.

Some 40 to 50 rescuers took turns hoisting the boat, carrying it two feet at a time until they found a spot in the river deep enough for the boat to float down to a waiting ambulance.

Rike was pulled from the river around 8 a.m., nearly 12 hours after rescue attempts began.

"It was very taxing. It was probably 70 degrees and the humidity was very high last night," Ovick said. "Lifting him, moving two feet at a time, you get tired real quick with 600 pounds of cargo."

Rike was taken to Burnett Medical Center in Granstburg, where he was reported to be in stable condition.

Rike, contacted by the Star Tribune of Minneapolis at his home Tuesday night, said he went on his first tubing trip because of his doctor's suggestion to take up a fun but safe activity, but "the farther we went on the St. Croix River, the worse the conditions got."

He said he appreciated everything done to rescue him.

"Without those people, I would still be out there," he said.