Police rush to crime scene on a rickshaw 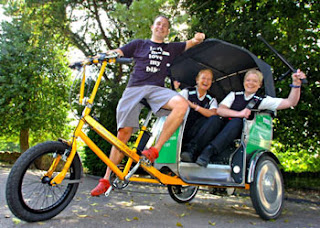 Rickshaw riders came to the aid of police chasing a wanted man through city streets by giving two police officers a lift. Pcs Ann-Marie Rosier and Sue Beament jumped aboard two of Hereford's rickshaw-style pedicabs to take them 800m to the other side of the city. Riders, Ben Matthews and Will Vaughan pedalled furiously across Castle Green and the duo got their man. He has been remanded in custody over an assault and breaching bail conditions.
Posted by The Man at 12:06 PM