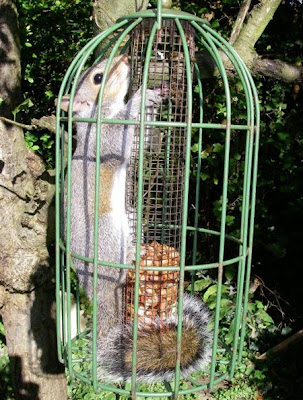 A squirrel had to be rescued from a bird feeder after it had eaten so many nuts it could no longer squeeze through the bars, the RSPCA said today.
RSPCA inspector Graham Hammond was called in by a resident in Christchurch, Dorset, on October 17 after they found the animal stuck in the peanut-filled bird feeder.
Mr Hammond said that the squirrel had managed to climb into the wire-frame feeder but had lost its svelte figure after gorging itself on the nuts inside.
Inspector Hammond said: "This was quite an unusual rescue.
"I think this squirrel had eyes bigger than its stomach but after it had stuffed itself with nuts, it had a stomach too large to escape the feeder - one which ironically, was designed to be squirrel proof."
Mr Hammond said he was able to free the grey squirrel, which was unharmed and ran off immediately.