A heartless traffic cop stunned mourners by slapping tickets on a funeral cortege. He swooped on six black limousines on a single yellow line outside an undertakers, waiting to be loaded with wreaths. 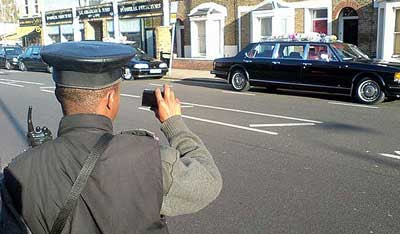 The uncaring jobsworth gave £100 penalties to two cars — but was chased away by furious relatives of the deceased after trying to put a ticket on the hearse. The cortege had stopped briefly outside Gillman Funeral Service in Tooting, south-west London.

Boss Andrew Gillman blasted: “The cop didn’t have the courtesy to approach anyone. It was a disgraceful thing to do, especially in front of 30 people who had lost a loved one. I asked him to have some respect but he just carried on.” Both tickets were cancelled after Mr Gillman appealed to Wandsworth Borough Council.