Chris and Wendy Anderson have a crime fighter in their north Auburn home, and he's no bigger than 10 inches tall and 3 1/2 pounds. Tank, a Chihuahua-Pomeranian mix, is credited by sheriff's deputies with flushing out a fleeing suspect who crashed a stolen minivan and was hiding under a motor home nearby.
. 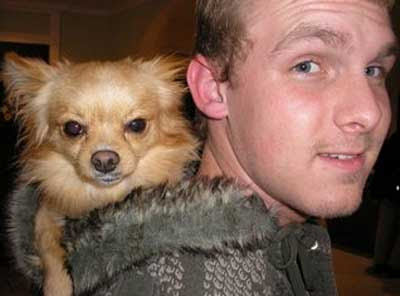 .
When a Placer County sheriff's deputy and his canine unit showed up, Tank led them to the suspect's new hiding spot deeper in the trees. The suspect gave up without a whimper.
Posted by The Man at 11:46 AM