I’m Innocent I Didn’t Do It 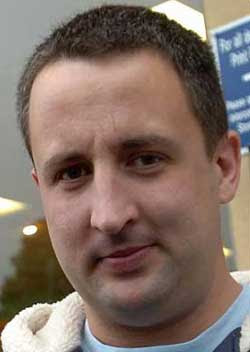 Locksmith Lee Hicks was arrested for burglary when police found his fingerprints on locks he'd fixed - after the raid. Officers swooped on his Tewkesbury home and held him in custody for three hours.They'd found his fingerprints at a garage that had been burgled, and assumed he was their man. But he had been called to replace the locks the real burglars had broken. His frightened wife and two young children looked on in disbelief as officers rummaged through wardrobes searching for evidence at 6am on Wednesday. He tried to explain to the police why his fingerprints were at the scene of the crime. But Lee was bundled into the back of a van and whisked off to Cheltenham Police Station. The 33-year-old says he was shown no sympathy and treated like a criminal during his four hours in custody.
Now he is considering suing Gloucestershire Police for wrongful arrest. He said the whole thing was "unbelievable" .
Posted by The Man at 7:08 AM