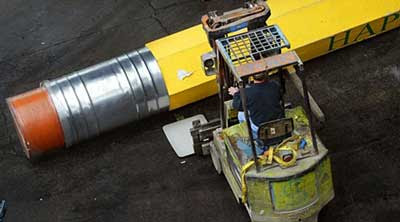 The 250-pound eraser is real rubber. The lead is 4,000 pounds of Pennsylvania graphite. The exterior matches the yellow hue of a classic No. 2.
Guinness World Record maker and breaker Ashrita Furman considered every detail when he built the world's largest pencil — except, perhaps, how to sharpen it. "We thought about making the world's largest pencil sharpener, but we ran out of money," Furman said. Furman escorted his 22,000-pound, 76-foot-long pencil to its new home at the City Museum in St. Louis on Monday. Furman cut the pencil in two for the trip from Queens, New York; City Museum artisans will reattach the sections soon.
Posted by The Man at 6:43 AM