Couple to marry after 50 year courtship 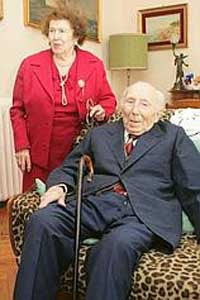 A 101-year-old Italian man is to marry his 98-year-old girlfriend after a courtship of more than half a century.
Giuseppe Rebaudi is to marry long time girlfriend Silvie Basain, who he started seeing in 1952, next month.
French-born Silvie said: "We just need to get a certificate from the French embassy that I have not been married before and am single."
She said her only worry was that they might be rushing things: "We have only been together for 50 years - that may be a bit quick but then again you are only young once."
The ceremony will take place at their home in Bordighera, in the north-west of Italy.
Posted by The Man at 8:27 AM