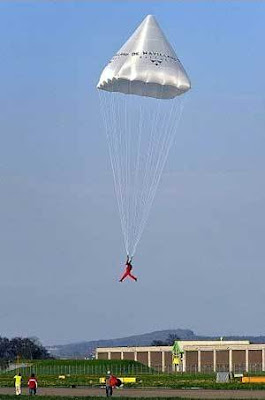 Olivier Vietti-Teppa prepares to land with his 12 kg pyramid-shaped parachute designed by Leonardo da Vinci in Payerne.
A 36-year-old Swiss amateur parachutist made a successful 650-meter (2,130-foot) drop Saturday using a replica of a parachute designed more than 500 years ago by Leonardo da Vinci. "I came down... smack in the middle of the tarmac at Payerne military airport," said Olivier Vietti-Teppa. "A perfect jump."Vietti-Teppa is the first person to have made it safely to the ground with the Leonardo model.
Vietti-Teppa jumped from a hovering helicopter and the Leonardo parachute opened at 600 meters, he reported. The parachute he used was made using modern fabric along lines designed by the Renaissance genius. The specifications were found in a text dating from 1485. The parachute consists of four equilateral triangles, seven meters on each side, made of parachute fabric, Vietti-Teppa explained. The base of the pyramid is a square of mosquito net, which enables the parachute to open.