Who's buried next to Mom? 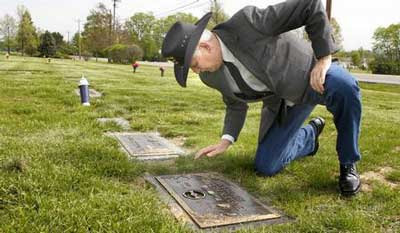 Man finds someone already buried in his grave.
A southwest Ohio man who planned to be buried next to his mother has found someone else already in his grave.David L. Bingham says someone who shares his name has taken over his would-be final resting place. He says he hadn't visited his mother's grave since 2005 and was surprised to find someone had been buried next to her in 2006.

David L. Bingham can't rest in peace.
Another man, another David L. Bingham, is already in his grave, lying next to his mother.
"My mom and I always talked about being buried next to each other," the very-much-alive David L. Bingham said.
"We used to joke about having a pipe installed between our graves so we could talk to each other. We'd laugh. We're a joking family."
He wasn't laughing during a recent visit to his mom's grave. He was sobbing.
"Mom, I'm sorry this happened to you," said the weeping 60-year-old Vietnam War veteran from North College Hill.
Bingham rubbed his hands over his mother's bronze marker. He touched her name: Evelyn Helton Bingham. His fingers traced the year she was born (1915) and died (2005).
He then read the inscription on the neighboring marker:
"David L. Bingham Sr. Beloved son and father. Gone fishing."
"That's not me," Bingham fumed. "I'm not a fisherman."
Posted by The Man at 1:44 PM