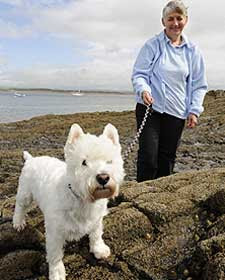 A dog who raced into the sea in Devon to save a spaniel from drowning has been recognised for his bravery. Milo, who lives with his owner Lynda Pomfret in Appledore, was abused by his previous owner which left him with injured legs and brain damage. But despite his injuries he jumped into the waves to save the other dog.
His bravery has led to him being crowned the winner of the PetZfactor 2008 competition from Saga Zone beating 500 other pets entered by their owners. Mr Fogle said: "Milo's personality really shone through. Not only is he very photogenic, but he's also a hero. "Having rescued another animal from drowning, despite having damaged legs himself, he's a true star." Mrs Pomfret said the rescue happened as she was walking six-year-old Milo along the shoreline in Appledore. "He's not the sharpest tool in the box", she said. "But he'll always be a hero to me."
Posted by The Man at 2:00 PM