For the Second Time in Less Then 2 Weeks
A EF-5 Tornado and Now Getting Flooded Out
Area gets a Soaking; Braces for More
The evacuation of New Hartford may be just the beginning. 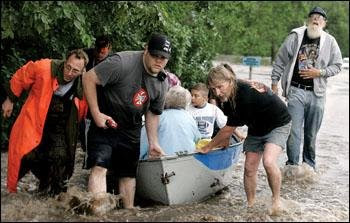 The rest of the Cedar Valley is crossing its fingers and filling sandbags. 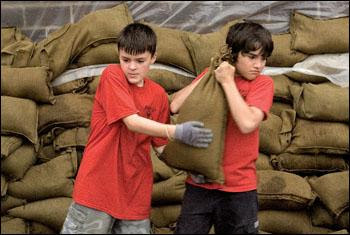 Boy Scout Troop 87 members Ryan Oberrieder, left, and Marcus Lampe pass heavy sand bags along the line as the Cedar River continued to rise as dozens of volunteers gathered to sandbag around the Ice House Museum along the Cedar River Sunday evening in Cedar Falls, Iowa.
.
Record flooding is projected for Waterloo, Cedar Falls and parts of Northeast Iowa after another round of heavy rains and severe storms Sunday. In perhaps the most visible evidence of the flooding at hand, a major portion of the city of New Hartford was evacuated Sunday night. "It's just so devastating. The whole town has low morale because it's been so stressful" since the tornadoes, said resident Lorrie Martin, whose house on Washington Street was taking in water.
Boats from New Hartford and neighboring fire departments were ferrying stranded residents to school buses that took them to a Red Cross shelter at the University of Northern Iowa's West Gym.
.
Railroad dam breaks, Clarksville flooding Just N.W. of Parkersburg
One-third of the city of Clarksville is underwater this morning after a railroad bed that generally acts as a dike to the city gave way under the pressure. The railroad bed swept away about 2 a.m., officials said. Fire officials went through the town telling people of the situation. About 50 homes were evacuated and shelter was set up at the Fire Station.Mayor David Kelm is calling it the worst flood in Clarksville in 70-some years. Sandbagging is going on in this morning. Bud Hirsch, fire chief in Clarksville, said "Some of the homes have 6 to 7 feet of water in them. That's catastrophic."Most of the water damage is to the basements and first floors of homes. The railroad is shut down for repairs to the rail bed. There is only one way into the city
Posted by The Man at 12:39 PM