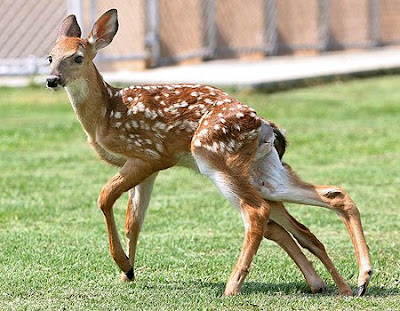 Veterinarians at a north Georgia college have been treating an odd-looking deer after it was attacked by a dog.
The deer, according to vets at Berry College, has six legs and was found over the weekend near Rome. The animal is recovering from wounds it suffered in the attack.
Vets believe the deer should be kept in captivity.
Due to the injuries, one of its two tails had to be amputated. The fawn has two distinct pelvises and uses one leg from each pelvis to walk.
The six-legged creature could be sent to the University of Georgia to be studied.
Posted by The Man at 1:30 PM