The night Max got the munchies 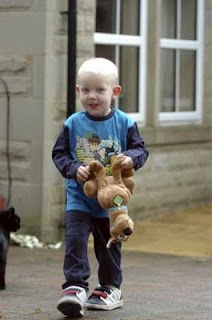 Boy aged three goes on a 3am trek in his pyjamas to get some sweets. There are times when you've got to have sweets and you just can't wait.
So when three-year- old Max McGrath woke up in the middle of the night, he knew exactly where to go - the local supermarket a mile and a half away.
As his parents slept on, oblivious to his mission, Max unlocked the front door and slipped outside.
Wearing his turtle-decorated pyjamas and his older brother's shoes, which were two sizes too big, he padded down the dark streets all the way to Somerfield.

So far, so good, the youngster must have thought.
But, understandably given his age, Max had not quite thought things through.
It was 3am, the store was closed, and he didn't have any money.
So it was that overnight delivery driver James Brown spotted the disappointed child peering through the supermarket's windows and asked him what he was doing there.
'He told me in a very matter-of-fact way that he was going to the shop,' Mr Brown said yesterday. 'He told me his family were at home asleep.'
Max was able to direct his rescuer to his house in Longridge, near Preston, but they could not raise anyone inside - so Mr Brown called the police.
The youngster's parents were woken to find an officer with their boy, and yesterday his mother told of her shockat what happened.
'He is very adventurous but it's a complete surprise he would do something like this,' said Amy McGrath, a 30-year-old nurse.
'It is terrifying to think what might have happened because he must have crossed several roads. And I didn't hear a thing.'
Max was reunited with his parents at about 4am.
'The door was doubled-locked,' his mother said. 'Max has got the key, unlocked the door and walked out.
'Now I just keep reliving it over and over in my head, thinking about what could have happened to Max. I'm just glad he's safe. Anyone could have found him but I am very grateful that James stopped and brought him home safely to us.'
Mr Brown, 23, from Bolton, said Max had been waving at supermarket staff stacking shelves, but no one noticed him.
'I looked at him and thought, 'That's not right'.
'I had a look around to see if there was anyone there and then I asked him what he was doing, and he said he just wanted to go to the shop.'
Posted by The Man at 8:57 AM