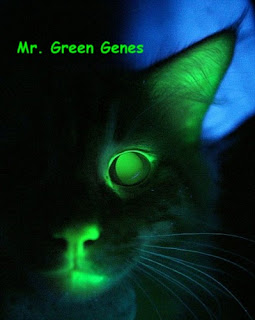 Mr. Green Genes The Glow in the Dark Cat
The Today Show intro's us to Mr. Green Genes, The first glow in the dark cat in the US.
His eyes glow ghoulishly in the right light, just like any other cat's - but so do his nostrils, gums and tongue. Mr Green Genes of New Orleans in the U.S. is the country's first 'glow in the dark' ginger tom.
In daylight he looks normal, but put him in a darkened room and switch on an ultraviolet light, and his face will beam out a bright green.