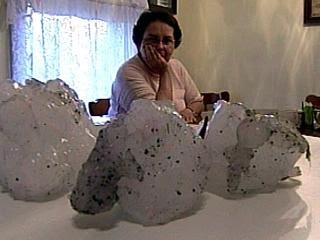 A Pennsylvania woman is recovering after a huge chunk of ice smashed through the roof of her home and hit her on the head.
"Something woke me up," said Mary Ann Foster, who has lived with her husband in her York Township home the past 31 years. "I felt my head and I had kind of a big, a kind of a bump."
Foster's husband Perry said the ice weighed about six pounds.
The chunk broke into pieces after it punched a hole in the roof and bounced off the side of Mary Ann's forehead.
"She came in and very calmly said, 'Something hit me on the head,'" said Perry. "She said, 'You better go upstairs and look at the ceiling. It's in bad shape.'' The ice left a gaping, two-foot hole in the ceiling.
Mary Ann escaped with a bruise and feels lucky that's all that happened.
"If I had been over further, if I had be laying on my back, if a bigger piece had hit me, I could be dead," she said. "Just remember, you never know what's going to happen. Just enjoy everyday."
It's not yet known where the ice came from. The Fosters say it's possible it came from space or from an airplane.
Perry gathered the pieces and put them in his freezer. The Fosters plan to take the ice to York College for analysis.
Video
Posted by The Man at 6:27 PM