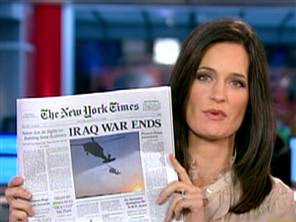 Prank NY Times: 'All the news we hope to print'
Commuters nationwide found out during Wednesday's morning rush hour that the wars in Iraq and Afghanistan had ended. Global warming, health care spending and the economy's problems were on their way to solutions too.
Some 1.2 million copies of a spoof of The New York Times, dated July 4, 2009, were handed out by the liberal pranksters the "Yes Men."
The 14-page parody announces the abolition of corporate lobbying, a maximum wage for CEOs and a recall notice for all cars that run on gasoline.
Posted by The Man at 2:16 PM