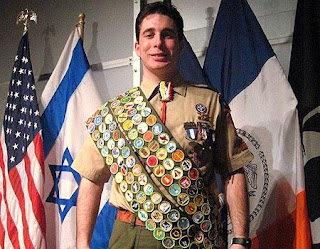 A Long Island NY teenager has earned all 121 merit badges offered by the Boy Scouts of America. It's an accomplishment the local arm of the organization calls "an almost unheard-of feat."
Oceanside resident Shawn Goldsmith earned his final badge — for bugling — in time for his 18th birthday in November. He far surpassed the 21 badges required to achieve the elite rank of Eagle Scout.
He says he took about five years to earn his first 62 badges and then nearly doubled that number in a matter of months. He did it with the encouragement of his grandmother, who passed away shortly before he reached his goal. He was awarded his final badges on Dec. 19.
.
Posted by The Man at 1:16 PM