Jack Russell in 'Lassie-style' mission to raise alarm of burglary

A Jack Russell fled from a house that was being burgled, and embarked on a "Lassie-style" mission to raise the alarm, crossing a busy dual carriageway and travelling over a mile to the home of his owner's relatives, where he began barking for help. 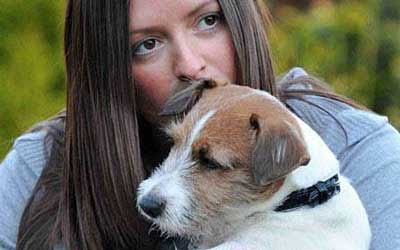 Jack Russell's are considered by some to be the most intelligent breed of dog
By the time Cody's owners managed to get back to the house, it was too late as the place had been ransacked and thousands of pounds worth of Christmas presents stolen.
Carli and Andy Jones, both 29, from Coseley, West Midlands, lost a wedding ring, an engagement ring, and a 50-inch TV but praised Cody for his actions which the family believe may have acted as a deterrent for the burglars.
The mother of one said thieves got away with £14,000 worth of their belongings and £2,500 worth of Christmas presents.
Cody left the house on Thursday afternoon and ended up at the home of Mr Jones's parents Malcolm and Jackie, one mile away.
Assuming something was wrong, they then phoned Carli who was out Christmas shopping but by the time she had got back home she found the front door kicked in and their prized possessions gone.
Mrs Jones said: "It was amazing what Cody did. He made it across the Birmingham New Road from the grass bank by our house, he didn't stop for traffic and I can't believe he made it.
"You worry about anybody crossing that road, and the dog is family.
"We wouldn't have even known we had been burgled if it wasn't for him."
She added: "He's a very clever dog, Jack Russell's are the most intelligent dog anyway, but he's very bright and he is a very loving dog as well.
"I was more upset by him crossing the busy road than anything else, because if I had returned home and the dog had gone I would never have got over that."
.